“And this is the San Diego Zoo?”

Our family travelled to San Diego earlier this month to fulfill Bennett’s wish through the Rainbow Society of Alberta, an agency that grants wishes to children with chronic or life-threatening conditions (Bennett has a genetic condition). We wished for a trip to San Diego because, at the time, the Calgary Zoo was still (mostly) shuttered after the flood and Bennett had been devastated about his favourite Calgary attraction being closed all summer. Since the San Diego Zoo is one of the world’s best, we felt that a trip to “America’s Finest City” to see its collection of animals, including Bennett’s faves — hippos and gorillas — would cheer him up.

Avery and Bennett pose outside the San Diego Zoo.

In the lead up to the trip I created a social story for Bennett all about San Diego. It showed him where we’d be staying and what we’d be doing, such as going to the beach (with a picture of La Jolla Cove) and visiting the zoo’s Safari Park (with a picture of a safari jeep surrounded by giraffes). I included pictures of koala bears and panda bears in the story, and it talked about how we’d be seeing a lot of animals in San Diego. The social story didn’t mention the zoo specifically, only because ever since the Calgary Zoo re-opened in November Bennett has been weird about it — desperate to go but simultaneously scared about some of the animals and buildings. 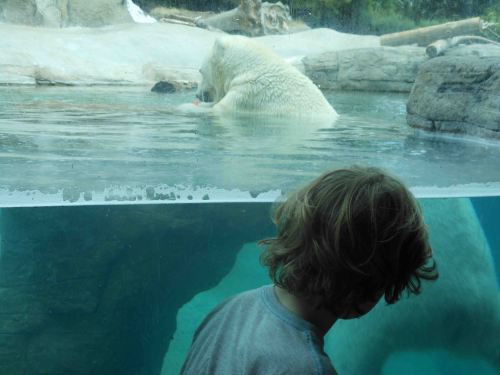 Bennett marvels at a polar bear playing and eating carrots at the San Diego Zoo.

Of course, when we first found out our wish-trip to San Diego had been granted Blake and I had gone on and on and on about the San Diego Zoo, but after the excitement simmered down and Bennett’s Calgary Zoo phobias surfaced, we were careful not to mention the San Diego Zoo by name. During April and early May we talked in code, referring to it as : “a place with animals,” an “animal park” and a “panda bear and koala bear place, with monkeys and stuff.” For all Bennett knew we were going to San Diego to see some guy’s private exotic animal collection.

Bennett and Avery stand pretty and proud as peacocks to be at the world’s best zoo.

The day of our zoo visit we drove to Balboa Park, parked the car and started walking toward the entrance. Out of nowhere Bennett said, “And this is the San Diego Zoo?” I laughed. “Yes, Bennett, we’re at the San Diego Zoo!” “Yay!” He somehow knew exactly where we were without us telling him.  We were thrilled he was excited and not at all scared — evidently, we were being careful for no reason. After that he pretty much dictated where we went inside the zoo, based on what he wanted to see: peacocks, flamingoes, hippos, gorillas, all kinds of monkeys, lions and elephants. We also saw lots of animals Calgary doesn’t have, such as polar bears, orangutans, koala bears and tasmanian devils.

Bennett loved watching the orangutans and the polar bears, and especially the male silverback gorilla, who was eating a head of lettuce and who actually stopped what he was doing to stare directly at Bennett a couple of times (“He’s looking at me!”). He also adored the Skyfari (a sky ride that spared us walking from one end of the gigantic zoo to the other) as well as the double-decker bus tour, which gave us the lay of the land first thing in the morning. Avery loved all of the Australian critters; Blake and I were in awe of the lush gardens everywhere and the quality of the animal habitats — the elephants’ enclosure covers an area of three acres because the pachyderms walk 10 miles a day, and the gorilla troop lives in an Eden of trees, verdant lawns and waterfalls! 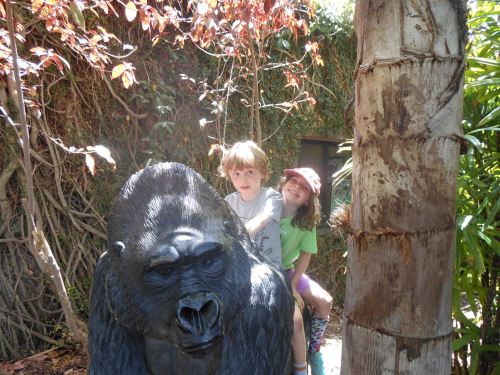 Aping around on a gorilla at the San Diego Zoo.

It was a great day and I can’t think of a better wish for our own little gorilla-boy, who got so tired walking all over the zoo to “see something else!” that he’d hit a wall by 3 p.m. (Blake nearly had to carry him out). We got Bennett what we think is an appropriate souvenir — a zoo ball-cap with his favourite animal on it. We can’t thank you enough, Rainbow Society!

A gorilla ball cap for Bennett.