What would you wish for?

Over the summer a women contacted me by email. She wanted to let me know she’d read my Swerve story about Bennett’s genetic condition. Her daughter also has a genetic condition, as well as autism (like Bennett), and so my story had struck a chord. She also told me she’d nominated our family to receive a wish from The Rainbow Society of Alberta, the same agency that had granted her daughter a wish years ago. I was really touched.

Sure enough, a month or so later a woman from The Rainbow Society phoned me to get some more information about Bennett, who has a genetic condition called 18q-. His condition expresses itself as developmental and cognitive delays that look a lot like autism. Autism on its own doesn’t qualify a child for a wish, but because of Bennett’s underlying condition it looked like we’d be eligible. 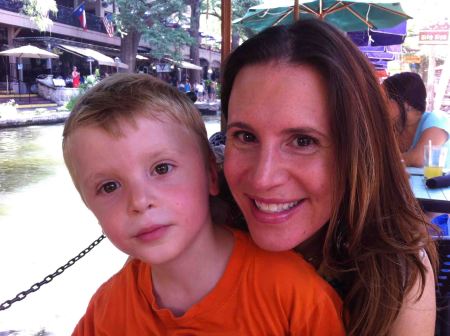 Bennett and me in San Antonio in 2012, where we attended the Chromosome 18 Registry & Research Society annual conference.

When I told Blake the news he couldn’t believe it. Like me, he’d always thought wishes — like those granted by charities such as The Rainbow Society or the Children’s Wish Foundation — were saved for kids with life-threatening illnesses, whose families wouldn’t otherwise be able to afford a trip to Disneyland, for example. We felt guilty wishing for Bennett — he has daily challenges, but he’s healthy. Surely there were more deserving families out there?

The Rainbow Society considers Bennett’s condition chronic. It is; he can’t be “cured.” Like other families referred for wishes — regardless of income or the child’s particular disability or disease — we live with our child’s struggles and challenges every day. A wish is small thing but something with the power to transport us from the unromantic and imperfect grind (as it often is) of raising a child with special needs.

Once it was settled that we would make three wishes on Bennett’s behalf (he is not cognitively capable of understanding the concept of a “wish”), we talked as a family, including our daughter Avery in the conversation, about what Bennett would want. There are certain rules around wish-making; for example, not all wishes can be travel-related, and those that are must be in Canada or the mainland United States (no African safaris or trips to Hawaii). The society also doesn’t grant wishes that involve medical equipment or medical travel.

After the flood Bennett was devastated about the Calgary Zoo being closed. He didn’t understand what had happened; he only knew that it was closed and we couldn’t go. The worst part of it was we’d been planning an outing to the zoo on Friday, June 21 — a.k.a. Flood Friday — with his SAS aide and behaviour therapist from Renfrew. We’d been preparing for that outing for weeks — the therapist had even created a social story about Bennett visiting the zoo. And just like that, the trip was cancelled. Almost every day for the month of July Bennett asked if the zoo was open. When I said no he would start to cry. He still asks every time we drive by the zoo (I don’t have the heart to take him there until it is completely reopened on Nov. 28). So, if we can’t take him to the local zoo…

Bennett’s wish No. 1: A trip to the San Diego Zoo.

The Rainbow Society will only grant one vacation wish, but it will let families wish for things that involve travel, such as a trip to a family reunion, or a trip to Ottawa to meet the prime minister. When Blake and I took Bennett to San Antonio in 2012 to attend the Chromosome 18 Registry & Research Society annual conference, we enjoyed meeting other families whose children have the same genetic condition as Bennett. We thought that maybe now, since he’s older, he would like to meet other kids like him — and Avery would have a chance to meet their siblings and perhaps talk with children in her shoes (e.g. kids with a brother or sister with special needs). So, since there are only three other people in Alberta with Bennett’s condition…

Bennett’s wish No. 2: Attend the 2014 Chromosome 18 conference in Connecticut.

Now it becomes more difficult. You want the third wish to make sense for Bennett, and to count. We thought of experiences (a hot air balloon ride? No, he’d freak out!). We thought of possessions (his own iPad? He spends too much time on the family iPad already!). What does Bennett love to do? He loves to swim. And since we can’t wish for a swimming pool…

Just last week our contact from The Rainbow Society called to let us know which wish had been granted. The best part was telling Bennett that night at dinner.

Me: “Bennett? Guess where we’re going to go? The San Diego Zoo!”

I’m not sure he knows all about this zoo in particular, but he heard, “We’re going to the zoo!” and all was well. Yes, a wish is a small thing, but its granting transformed that dinner into a magical trip planning session. We had Bennett guess all the animals he thinks we’ll see in San Diego (no surprise hippos, gorillas, tigers, elephants and butterflies are on the list), while Avery mapped out some other stops on our itinerary, such as Sea World. Now we just have to decide when to go. Thank you, Rainbow Society.

2 responses to “What would you wish for?”