I am the first to roll my eyes at so-called “disaster tourism,” where people visit a place that’s been devastated by a natural disaster, such as New Orleans after Hurricane Katrina, to see and take pictures of the aftermath. Call me an old-fashioned travel rube, but I can’t really get my head around the appeal of going somewhere to ogle carnage. Part of this stance has been influenced by where I live — all summer disaster tourists have been walking or riding their bikes up my sidewalk to gawk at the eroded river bank and our churned up street that almost fell into the Bow River.

But I changed my tune when I found out the Inglewood Bird Sanctuary was offering free guided Flood Tours four times a week into October. Before the flood we visited the Bird Sanctuary as a family a couple times each season. We often spotted deer or chickadees, and sometimes a muskrat or great blue heron. I’ve missed the familiar hiking trails and wanted to see for myself how this Inglewood attraction fared during the flood — not to gawk, but to know.

The trails at the Inglewood Bird Sanctuary remain closed, but you can visit the park on a “Flood Tour.”

Guide Kyle McManas, a member of the education team for the federally-designated wild migratory bird sanctuary, led us from the nature centre (which was unaffected by the flood) on a paved path toward the lagoon. There we stopped and looked at the debris-clogged main bridge while McManas described the impact of the flood on the sanctuary’s infrastructure and animals.

The large logs have been removed, but this bridge is still clogged with detritus.

At its highest, the river flowed through the sanctuary over top of the bridges (washing one away completely) and all the paths — save the high gravel trail running between the lagoon entry point and Colonel Walker House — at an estimated flow rate of 2,200 cubic metres per second, three times the flow of the 2005 flood that also flooded the lagoon. When the water receded it left a mess — plant debris and layers of silt. Park staff were encouraged to see wildlife return to the area immediately, including deer, beavers, ducks, kingfishers and even porcupines. As McManas explained, though dramatic, floods are a regular (if sporadic) occurrence in a riparian environment. 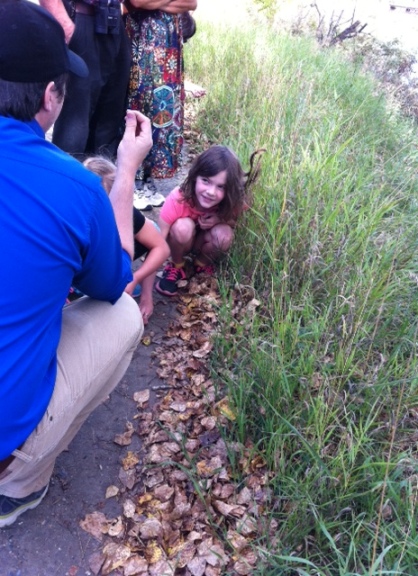 Avery examines a layer of silt that runs along the edge of the trail, proof the water ran that high.

While it’s what nature does from time to time, it’s still not nice to see how much the Inglewood Bird Sanctuary has to do to rebuild. Though work has already begun on the trails, the planned re-opening isn’t until summer 2014.

This coming weekend, Sept. 28 and 29, you can visit the Inglewood Bird Sanctuary and Colonel Walker House, which will be open between 10 a.m. and 4 p.m. both days as part of Doors Open YYC. Interestingly, Colonel Walker House was originally built much closer to the Bow River, but a flood in 1882, and then another one in 1897, destroyed the first two attempts. The current brick house sits much higher, but its basement still flooded in June.

So, have I become a disaster tourist? Hardly. It was actually a relief to see the bird sanctuary — I was expecting a lot more devastation (I’m sure it looks a lot better now than it did on June 25, the day the workers were allowed back in). Still, they have a lot of work ahead of them and I’m hopeful we’ll be able to resume our regular walks there soon.

A diagram inside the nature centre at the Inglewood Bird Sanctuary illustrates how high the Bow River ran before it crested at midnight on June 21 — 4.1 metres, up from about 2 metres at 9 a.m. on June 20.

Drink of the Week: Michelada

A nice, cold beer is a beautiful thing when bowling your way to a sad 125 at the newly-opened bowling alley at National on 10th in Calgary. But I have to say that a tequila-spiked, Mexican beer cocktail called the Michelada does a far better job of numbing the sour taste of bowling defeat. 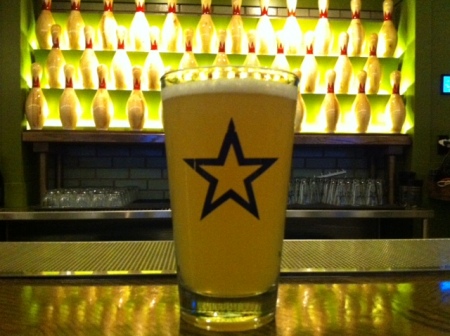 The drink is but one Mexican-themed cocktail featured on the bowling alley menu. There’s also a margarita, a paloma (like a grapefruit margarita, but with fizz), and two cocktails made with mezcal, another agave spirit with a smoky flavour. Bartender Stephen Phipps took some liberties with the menu and created a couple of fun sips like the fan favourite Jesus Quintana (like a pisco sour, with chili bitters) and Orale! (rum, Mexican cola, lime and mole bitters). The drinks complement the Mexican street food eats and are priced to match ($10 to $12).

We spent a fun evening throwing balls down one of eight lanes inside the eagerly-anticipated space located in the basement of the National on 10th beer hall, opened back in April. I’ve always found bowling alleys to be somewhat dreary and creepy places, so it’s refreshing to hang out in a hip one that features fare beyond hot dogs, greasy fries and mass market suds.

Sadly, I was only able to sample a handful of the drinks at the opening party, but I’ll be back to try the rest… and to work on my bowling game (I’m gunning for a 300, baby!). 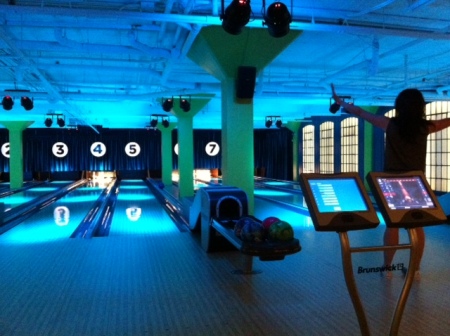 Bowling in the basement at National on 10th is a fun way to spend an evening.

Shake all ingredients together with ice except beer. Strain into a chilled pint glass and top with Phillips Analogue 78 Kolsch.

We go to Fernie a lot in the summer and have spent the past several years exploring the many hiking trails in the area. A favourite place to go has been Island Lake, a beautiful mountain lake located up a winding dirt road that travels through Mt. Fernie Provincial Park. We usually just walk around the lake with the kids — or canoe on it — but this summer we had the opportunity to leave the children in Fernie with Grammie and spend a night at Island Lake Lodge to celebrate our anniversary (16 years!). This meant we could graduate beyond the lake trail to the more difficult ascents above timberline.

Taking a rest on Spineback Trail.

The lodge is best known as a cat-skiing base during the winter, when feet of epic Fernie powder fall on the slopes that surround the lake like an amphitheatre. Come summer the area transforms into a beautiful mountain sanctuary, with old growth cedar forests giving way to sub-alpine meadows dotted with wildflowers and rocky escarpments inhabited by marmots and pikas.

We opted for Spineback Trail, a hike that climbs 530 metres over 3.5 kilometres up a ridge. The payoff? It’s a great workout and there’s a lovely wooden bench at the trail’s terminus that affords an eagle’s eye view of Island Lake and the lodge far below.

Look down, waaaay down: Island Lake and Island Lake Lodge as seen from the top of Spineback Trail near Fernie, B.C..

We boogied back in a short but insistent rain storm and headed straight for the hot tub to help us warm up and rejuvenate our over-tired muscles. Then it was time for a rich dinner of duck, lobster, creme brûlée and lots of wine, served in the main lodge. The mountain air afforded us a sleep in (kid-free, hooray!) and we emerged for a buffet breakfast and a short hike around the lake. There wasn’t a lot of time to luxuriate in our cozy room in Cedar Lodge (complete with balcony and mountain view), but the point of an escape to Island Lake is to get active in a breathtakingly beautiful place. What a great way to spend our anniversary — doing something we love, together, in the mountains. We’ll be back!