This is our family: 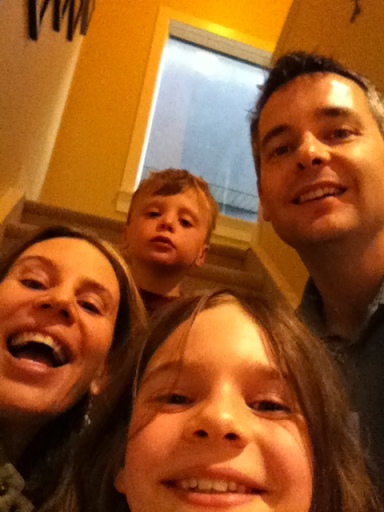 This picture was taken a couple of weeks ago, when the Bow was low.

And this is our home in the riverside community of Inglewood, the oldest neighbourhood in Calgary, Canada:

Our home in Inglewood. Good thing Blake had mowed the lawn (and dandelions!) recently since we ended up on national TV!

And here was our view of the river:

We felt quite safe when the river was 200 feet away.

On Thursday evening, June 20, I was making meatloaf while my kids played after school, keeping an eye on the raging Bow River some 200 feet from the front door. It had rained all night Wednesday and the river had risen more than two feet since morning. I’d heard about the flooding in Canmore and Bragg Creek and I was worried we were bracing for a repeat from 2005, when the Bow had flooded 13 of the 18 holes at the Inglewood Golf Club across the river. Little did I know we were facing three times the peril of eight years ago, and that our street would become a battleground of man vs. nature by Saturday night, with city crews and military muscle working to save the homes on our street from falling into a river that chewed through almost 150 feet of river bank in 24 hours.

You regularly hear stories in the news about people who lose their homes to fires, hurricanes, tornadoes and floods. I’ve always wondered if the residents had time to grab anything precious before they evacuated in the middle of the night. What would they reach for? Their wedding album? A jewelry box? It must be hard to think amidst sheer panic… perhaps they reached for random things, like their favourite book?

When we heard our neighbourhood was being evacuated on Thursday evening I wasn’t yet thinking like a refugee, weighing in my head what I couldn’t live without. Instead, we packed up the laptops and some suitcases in an orderly fashion, and even sat down to a family dinner to eat the damn meatloaf. Honestly, I thought the emergency response was a bit much; that they were being too cautious. After all, our house and neighbourhood had survived the flood of ’05!

We drove to Mackenzie Lake to stay with friends and I figured we’d be back home the next morning. Dream on! We all know what happened that night: By Friday morning downtown was flooded and the Calgary Stampede was basically underwater, as was Elbow Park. Some 25 neighbourhoods, housing nearly 100,000 Calgarians, had been evacuated. All bridges to downtown were closed, many roads were impassable and power in parts of the city was out. People were being told to stay put.

But still I didn’t really start to fret about our home until a friend e-mailed this photo on Friday afternoon: 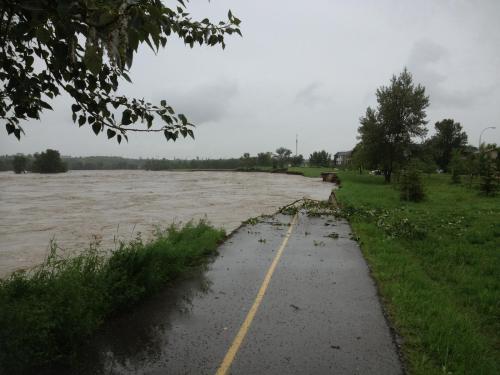 Pathway to nowhere but trouble as the Bow River ate through metres of riverbank in Inglewood on a soggy Friday.

We drove to our house Friday evening, 24 hours after we’d left, and were dismayed to see the river almost on level with a bank that had been eroded in the span of a day. Police on our street were worried. With the help of a friend we grabbed our lock box from the basement, the jewelry box and some photo albums and camera equipment, and moved some things from the basement to higher ground in case it flooded. But still we didn’t understand how dire the situation was (clearly, as once again I left the cocktail shaker behind).

By Saturday morning the river was down somewhat, but reports from our street were not good. From photos shared on Facebook and Twitter it looked like virtually no riverbank was left. Only our street separated the houses from the raging river. One report said police expected at least three houses on the end of our block to “fall into the river.”

I now understood the panic of thinking you are about to lose your home. Knots tied up my stomach, adrenaline coursed through my body causing my hands to shake, and my left foot to go partially numb. I couldn’t think. We arrived at 3 p.m. and started grabbing stuff to haul out. Our kids were with us and they started crying from sensing our panic (thankfully, a neighbour escorted them to a home where childcare had been arranged while families along 8th and 9th started pumping out their basements).

We pulled family pictures and art off the wall, grabbed camping equipment, my son’s favourite Lego. We took the files and the photo negatives and the wine (hey, priorities!). And more clothes. Special keepsakes. My kids’ artwork and school binders. Their baby books. Our amazing community rallied and soon friends and neighbours were there helping us carry things out of our house, making judgement calls about what should go and what should potentially fall into the river. I asked a stranger to carry our betta fish to safety, and even stuffed a pack of fish food into his pocket. Later he walked down 9th Avenue carrying the fish bowl, like a character from a Dr. Seuss book. Did I grab anything random? Why yes, my copy of Gone with the Wind and also a cookbook.

What we left behind: furniture and dishes and books and some clothes and most of the kids toys and (sigh) all my shoes. Things that could be easily replaced. Even though there was no rational thought process on our part, it seemed with everyone’s help we had grabbed what was irreplaceable, and also what we would need if we did lose our home.

We were devastated over what was happening — and how quickly it happened — and torn up about the events across the city. But we were also blown away by the support and kindness from people in our neighbourhood who immediately came to our aid. We felt loved, and were safe by Saturday evening with those we loved. As we drove away from our house for what we thought might be the last time, the military was arriving en masse to work with the city to berm up the river and stop the erosion. And of course we saw this on TV, which made it a little hard to stay calm: 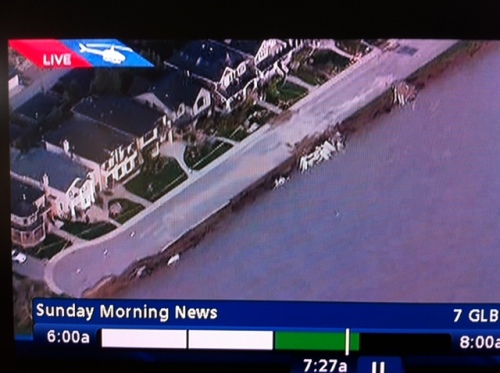 Ariel shot of the homes on 8th Ave. on Sunday morning.

We learned Sunday that the team had worked tirelessly to place 40 concrete barricades and 2,000 sand bags into the river to protect the cutback and somewhat divert the flow of water. By 2 p.m. we were back in the ‘hood and learned they thought the houses were safe. Back at the house we were relieved to see the water had gone from our basement and we set about moving furniture to the garage, removing baseboards and taking up the soaked carpet. Minimal damage considering what could have been had the military not arrived when it did. Thank you, boys in green!

We are touched by everyone’s concern and so relieved to think this all might be ending and life could soon be returning to normal for everyone impacted across the city. Of course, through it all we always had what matters most — each other, our children, our puppy, our friends and family. But the thought of losing a home — that thing you build together that is the epicentre of your life — is traumatizing. We are so thankful it looks like ours will welcome us home soon.

Not long ago a realtor pooh-poohed our old neighbours’ house, telling them it wasn’t “riverfront” when they were listing it. I guess it qualifies as riverfront now.

This entry was posted in Potpourri and tagged Calgary flood, flooding in Inglewood, homes on 8th Avenue Inglewood, yycflood. Bookmark the permalink.

20 responses to “Our Calgary flood story”