A Banff institution: the Grizzly House

Posted on March 20, 2012 | 1 Comment
Four decades worth of grease build-up coats every surface, your eyes sting from the smoke an hour after stepping through its iconic A-frame entrance, and you may receive a phone call from a stranger asking whether you’re wearing panties immediately after being seated — but don’t let those small details dissuade you from visiting the Grizzly House restaurant in Banff. At least once. 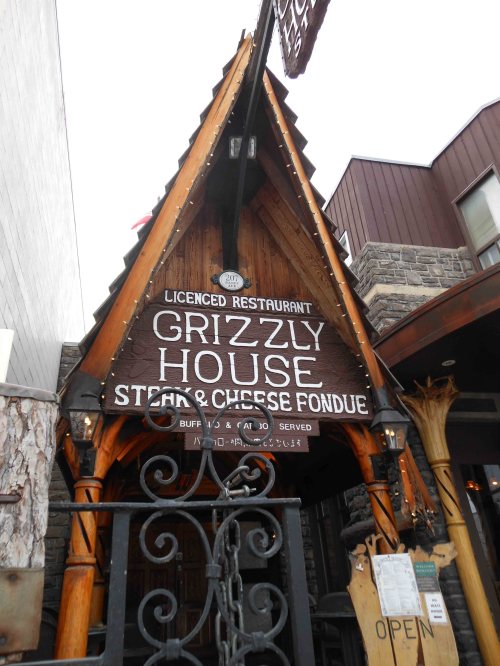 You can't walk down Banff Avenue without noticing this restaurant and wondering what it's like inside. Hint: there's a wood-carved bear, a disco ball and a "private room" in the back.

I’ve been visiting Banff for 15 years and had never eaten there until this past weekend. We’d given it a miss for several reasons. First of all it’s pricey — the complete fondue dinners cost over $40 per person, depending on what kind of meat you order. Also it’s fondue (yes, I’m a child of the 70s, but that doesn’t mean my palate is trapped in that decade). Plus you have to cook your own meat on hot stones (more on that later), which can be a lot of work.

Finally, the place really, really smells. This means your clothes will reek for days from the plumes of cooking-meat smoke that hover permanently in the air. Imagine if a stinky-cheese bomb exploded on an exotic wildlife farm and the ostriches, gators, snakes, sharks, wild boars and lobsters all went up in smoke at the same time. That’s what the Grizzly House smells like. Hence the burning eyes.

But let’s get past all that because I haven’t had this much fun at a restaurant dinner in years.

The Grizzly House owner is every bit as vintage as the decor inside his decades-old establishment. I think he still likes to party, too.

“It’s not fine dining — it’s fun dining,” said Gizzly House owner Peter Steiner, who was sitting outside of his restaurant smoking a pipe and clad in a fur cap. Steiner opened the Grizzly House in 1967 as a disco dance hall — the original disco ball is still hanging from the ceiling, though the bottom is dented from repetitive falls. Soon after the club began serving fondue and hasn’t changed its menu since. The restaurant still plays non-stop 70s music, though thankfully the disco ball remained motionless through the duration of our meal.

Another holdover from the era are the telephones at each table. “Back then a disco hall in Banff was a meat market,” said Steiner. “I thought phones would be a good way for introductions, and save guys from having to buy a girl a drink.” Now referred to as “swinger” or “hook-up” conduits, the phones add a level of hilarity to the meal, especially after several glasses of wine.

Equally as entertaining was our waiter Billy, who, with his chiseled face and blond hair swept back into a ponytail, looked like he’d stepped straight from the cover of a Harlequin romance novel. Billy had an uncanny knack for adding a layer of innuendo to his dinner announcements, making the meal instructions sound suggestive and kinda dirty. We were told to keep our hot rock moist at all times by buttering it in slow, rythmic circles, for example.

Harlequin Billy also confirmed the existence of a private dining room (a.k.a. “secret sex room”), complete with an oval mirror oddly placed at crotch level. Its purpose, back in the day? “Every once in a while you just want to confirm your ‘friendship’ before you get home” with your new date, explained Billy. Yes, the Grizzly House earns its tagline: “For Lovers & Hedonists.”

Fortunately, no one (to my knowledge) ended up in the Grizzly House back room that night, but I can’t confirm what happened at Aurora nightclub later. I had to drive back to Calgary with a belly full of cheese — squinting all the way, post-smoke — in a car that smelled like an exploded exotic wildlife farm.

One response to “A Banff institution: the Grizzly House”