To say Bennett has been slow reaching certain milestones is an understatement. At times his progress has seemed glacial, but I’m proud to say we’ve never stopped believing that given an opportunity and a lot of encouragement, he might eventually get there. That was what happened this past winter with skiing and it’s also the case this spring with riding a bike. 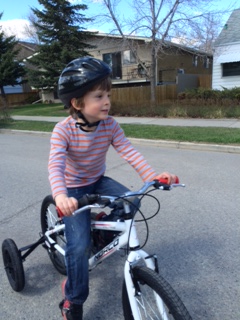 Bennett cruises the ‘hood on his new Norco adapted bike from Bow Cycle.

We got one of those strider bikes for Bennett when he was three. There was zero interest on his part to even go near the thing; bribing him with M&Ms worked only to get him to straddle it while holding the handle bars (he would then immediately climb off). After a month of this we returned it.

Last year, when Bennett was five, he tried riding an adapted bike from his school, and he kind of liked it. It’s basically a bike that’s fitted with large training wheels, crusier-style handle bars (so the rider doesn’t have to sit all hunched over) and pedals that keep little feet from slipping off. Also, this particular bike featured a spring that made the handle bars pivot back to centre, so Bennett wouldn’t be able to turn too suddenly and jack-knife the bike. We got him out a couple times with his physical therapist and worked on teaching him to pedal while paying attention to where he was going. It requires a lot of coordination to ride a bike and at the time I didn’t think it would be worth investing in one so we held off.

The breakthrough happened late last summer when Bennett took it upon himself to learn to ride his PlasmaCar around the backyard patio. He got quite good at navigating it, proving he could steer it with ease and stay focused. A Radio Flyer scooter followed for his sixth birthday. When he demonstrated his interest and burgeoning ability to ride it this spring we decided to take the plunge with the bike.

I contacted Bow Cycle — the same bike shop that adapts bikes for Renfrew (Bennett’s school) and for the Calgary Cerebral Palsy Association — and they were awesome about customizing a bike for Bennett. They found a Norco that’s a good fit for him and then added large training wheels, modified handle bars and pedal baskets to keep his feet on the pedals. He was pretty excited and couldn’t wait to ride it around Inglewood, ramming the front wheel into curbs wherever possible. What amazed me is that he suddenly understands how to pedal; it’s no longer a struggle. He’s also learning how to stop the bike with handle bar brakes. What a difference a year makes! 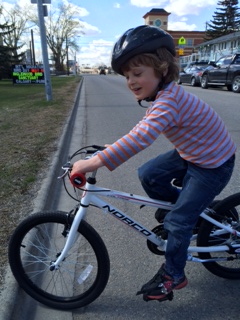 Straight for the curb. That’s my boy!

As with every new skill, we anticipate there will be hiccups. Just as Bennett took off and got out of control skiing on the bunny hill at Panorama, he’s already crashed his new bike — right into the rose bushes in our backyard. Progress, right?

This entry was posted in Outdoor Adventure, Potpourri and tagged adapted bicycle, autism and learning to ride a bike, developmental delays riding a bike, where to get an adapted bicycle Calgary. Bookmark the permalink.

One response to “Free-wheelin’ in Calgary”