The boy can ski

You’d think my best memory of Family Day weekend would be the epic Fernie powder. Nope — it was watching Bennett finally link turns as he skied down Meadow, a green run off Deer Chair, following behind Blake with a huge smile on his face. It’s official: the boy can ski. 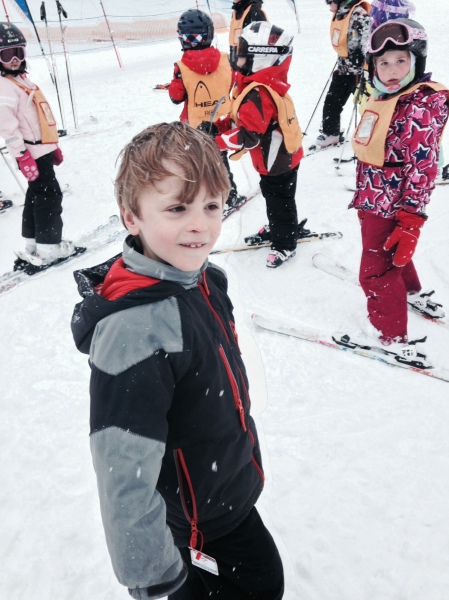 Bennett is excited and proud to be skiing! Photo by Kevin Turner, taken at Fernie.

It’s been a long and slippery road getting Bennett on sticks. We began the journey two years ago, by making him put on ski boots and ride the magic carpet. We knew then that we couldn’t rush him into it; that he had neither the strength nor the co-ordination to master the snow plow wedge, or to steer himself, so we bided our time.

Bennett rides the Mini Moose at Fernie in 2012.

Last season we enrolled him in two private lessons at Canada Olympic Park, followed by a ski-and-play lesson at Fernie, for a learn-to-ski series I was writing for Snowseekers.ca. He learned about pizzas and French fries, and seemed to enjoy skiing, but he had no focus. After lessons when I tried to ski with him he gazed off in every direction but straight ahead, oblivious to my calls of, “Pizza! Pizza! Bennett, stop!” What’s more, after a couple trips up the magic carpet he would declare, “All done with skiing!”

“Hmmm, what’s that on the ground?” Bennett wonders, looking every which way but straight ahead in 2013.

When your child had a disability it can take a long time for him to learn something that other children master in a day or a week or — as is the case with skiing — a season. Knowing it could take a long time, but committed to the idea of our family being able to ski together one day, we persevered. This year we enrolled Bennett in the Canadian Association for Disabled Skiing (CADS) program that runs over eight weeks at COP and that I wrote about for the Calgary Herald.

For the past six weeks his volunteer instructors have been getting him out, attaching a ski bra (a.k.a. edge-wedgie, which holds his ski tips together and makes it a lot easier for him to make a snow plow) to his skis’ tips and having him do laps on the magic carpet. After each lesson they would report that he was just going straight down with no pizzas, or he wasn’t into it, or he was too cold. When I snuck out to observe him he was in Lala Land, chewing on his mitten and not paying any attention. “What’s the point of this?” I was beginning to wonder. I felt like I was feeding my dream instead of attending to Bennett’s wishes (namely, to warm up and eat potato chips in the lodge). 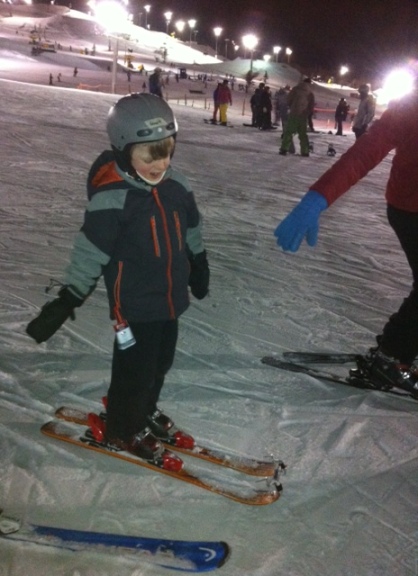 But then in Fernie last weekend it all seemed to click. Instead of me skiing backwards down the hill facing Bennett, I turned around and told him to follow me down Elk from the top of the Mighty Moose poma… and he did. I told him to turn when I turned (and I yelled, “Turn!” every time I turned)… and he did. I told him, “Okay, we’re going to ski through those four coloured arches,”… and he followed me through them. He even stopped when I said, “Stop!” without running into me. (He still needs an edgie-wedgie, but I’m okay with that.)

So when Blake suggested we take him up the Deer Chair, I thought, “Why not?” With both of us there we could surely intercept him should he go careening out of control toward the trees, another skier or a chairlift tower. But here’s the thing: he maintained a controlled wedge while following behind Blake. He linked his turns. He stayed focused — it was as though needed a longer, more challenging run to stay on task. He even managed quite a long traverse across the slope back to the base. And the best part? Bennett smiled the whole time. Instead of declaring he was “all done,” he wanted to go up Deer Chair again (in itself an exciting journey) and again and again. Forget that powder waiting up in Currie Bowl — I’d rather ski Deer Trail with Bennett.

This entry was posted in Outdoor Adventure, Parenting and tagged CADS Calgary ski program, Can kids with autism ski, learning to ski, teaching kids with autism to ski. Bookmark the permalink.

5 responses to “The boy can ski”