From the top of Grouse Mountain you can see the sprawling green forest of Stanley Park, the skyscrapers and condo towers of downtown Vancouver and, in the distance, Vancouver Island. It’s a stunning panorama, and I had to think — how have we never been here before?

The view from the top of Peak Chairlift at Grouse Mountain.

We have visited family in the community of Deep Cove, in North Vancouver, for years, but in the past we’ve always headed in to Vancouver proper to “play,” hitting attractions like the Vancouver Aquarium and Granville Island. This time, we stayed exclusively in North Van, with great results.

We hit three great family spots in two days during a recent visit.

We started the day on the Super Skyride tram that whisks passengers up 2,800 feet in about six minutes (alternately you can hike up the mountain, a trek that’s called the Grouse Grind. The downside is you will offend passengers on the tram ride down with your ripe B.O musk). We lucked out and got up Grouse Mountain just in time for the World Famous Lumberjack Show, a hilarious “duelling chainsaws” skit between competing mountain men. 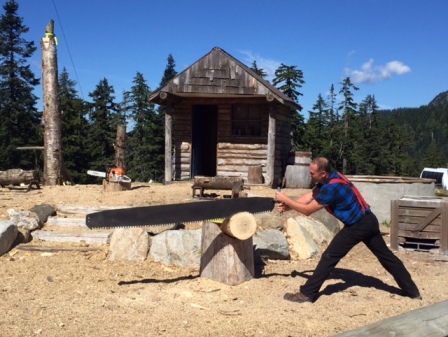 A lumberjack competitor saws a log with his long saw at Grouse Mountain.

Afterward, we walked over to the bear enclosure to see orphaned grizzly bears Grinder and Coola cavorting in the sun and long grass. Avery, Bennett and I caught the Peak Chairlift to the top of the mountain for a great view of downtown Vancouver and also saw daredevil paragliders leaping off the mountain. Meanwhile, Blake took in part of the Birds in Motion demo.

We wobbled and staggered our way 450 feet across the jiggly Capilano Suspension Bridge, originally built in 1889, which spans the Capilano River at a height of 230 feet. Then we headed straight for the Treetops Adventure, where you can walk between the tops of towering Douglas Fir trees on a series of seven suspension bridges. What’s cool is the  platforms around each tree have been built so the trees can keep growing. What’s more, you get a totally new perspective on the the coastal rainforest below.

Walking between the tops of Douglas Fir trees at Capilano Suspension Bridge Park.

We ended the afternoon on the Cliffwalk, which I imagine is like a via ferrata but without the need for a helmet, harness, ropes and carabiners. It’s basically a pathway that’s been built along the side of the granite cliff that drops down to the river. Parts of it jut out into space over the river thanks to a system of cantilevers.  It’s pretty cool.

Here’s a tip: to avoid crowds, visit this busy North Van attraction either right when it opens, or after 5 p.m. You’ll be able to really take in the grandeur of the forest and the span of the bridge with fewer people.

This small arc of gravelly sand (wear water shoes!) is perfect for kids to swim or beach-comb while parents relax on a blanket or help said children look for shore crabs.

Picturesque Deep Cove beach is a nice place to spend a summer afternoon.

We staked out a spot equidistant between the water and the playground in the adjacent Panorama Park and spent the afternoon in beach mode. Later we walked the cute two-block stretch of boutiques and cafes along Gallant Ave. in the heart of Deep Cove and stopped in for ice cream. The best park of the day? Catching North Van’c smallest shore crab. 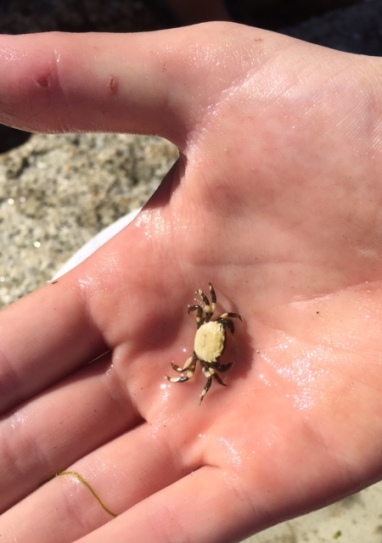