5 things Glasgow taught me about Scotland

Cities give us great insight into the host country. You hear the collective expressions, get a sense of the style, a feel for the people and an idea of the things citizens hold dear. And so it was in Glasgow.

Having never been to Scotland, I really had no idea what to expect. Prior to departure, friends who’d been there expressed grave disappointment I wasn’t going to Edinburgh; even in Glasgow, other tourists urged me to make the trip north. Well, this Edinburgh must be quite amazing because I really, really liked Glasgow. The architecture, the pedestrian streets, the food, the cocktails, the people. Maybe it’s because it’s Old World and my modern-city self craves heritage and gothic spires? No matter. I think Glasgow is beautiful and hip, and my short stay was a great education and introduction to all-things-Scottish (tip: sign up for Glasgow’s hop on-hop off bus tour if you’re short on time). Here’s what I learned.

As in, “Fancy a wee dram?” “Here’s our wee cocktail list.” “Did you see the wee cows?” Everything is wee, even when it’s giant. Well, okay, the drams are wee, but then you end up having, like, four, so it goes from wee to big (hangover) in no time. I think they say wee — especially in relation to food and drink — so they won’t feel guilty about packing away shamefully large portions. A case in point: here’s my “wee bowl of porridge.”

Served in a giant bowl with a giant spoon, my porridge is actually anti-wee. But it’s also delicious.

2. Scotch is a thing

Well, duh, right? (But evidently there are some Scots who don’t like whisky, though never have I seen so many bars with such great selections.) The dram is a social convention, something to share over conversation with friends. Scotland also happens to have a staggering number of distilleries, about 98. Glengoyne is relatively close to Glasgow and it’s worth a visit to get an overview of the distilling process, and to sample some wee drams.

Part of the whisky selection at Ubiquitous Chip, down Ashton Lane in Glasgow.

I kind of thought that kilts were something people with Scottish heritage wore at special events to stand out from the crowd. In Scotland, they wear plaid daily, with pride. Tour guides at Glengoyne sport plaid trousers, bagpipe-playing buskers work pedestrian malls dressed in plaid kilts, and stylish hipster Glaswegians wrap wool plaid scarves around their necks — in May!. Naturally, I returned to Canada with some plaid (and I’m not even Scottish). 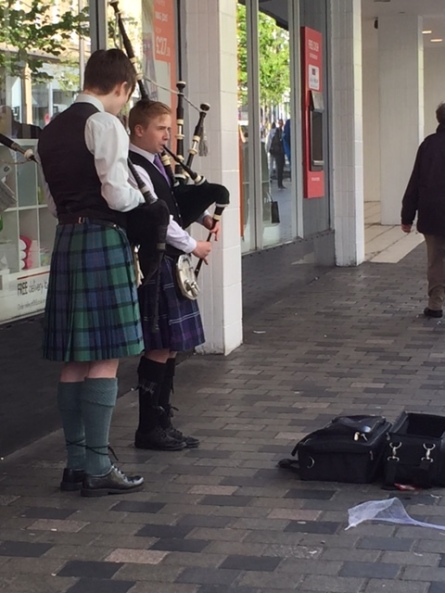 Even though the Harry Potter movies were not filmed at the University of Glasgow, you’ll swear you’ve walked on set while wandering through the campus. A short walk away is Ashton Lane, a hidden alleyway lit with fairy lights and packed with pubs and cafes, that was supposedly author J.K. Rowling’s inspiration for Diagon Alley. Other parts of Scotland were featured in the films, including Glenfinnan Viaduct and Glencoe. It all conspires to give the city — and country — a magical feel, like anything could happen… or maybe that’s just the wee dram talking. 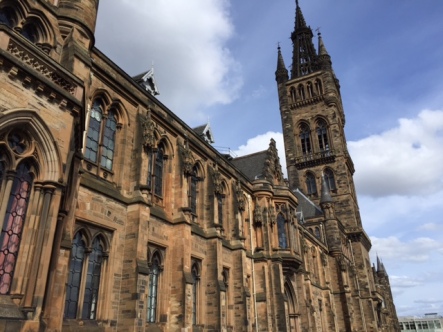 It helped that the day I toured Glasgow was a public holiday (and the weather was nice, for Scotland = not raining), but still, every green space I walked through, from the Glasgow Botanic Gardens to Kelvingrove Park, was abustle with individuals, couples and families taking some air. The Kelvingrove Art Gallery and Museum, one of the country’s most popular free attractions, was also filled with locals contemplating art until staff kicked us all out at closing time. Maybe — since it rains 200 days a year — sunny days just bring everyone outside, but I like to think my experience illustrates Glasgow’s vibrancy and its residents’ appreciation for the city’s beauty and treasures. At any rate, I’ll certainly be back to Scotland for another wee visit. 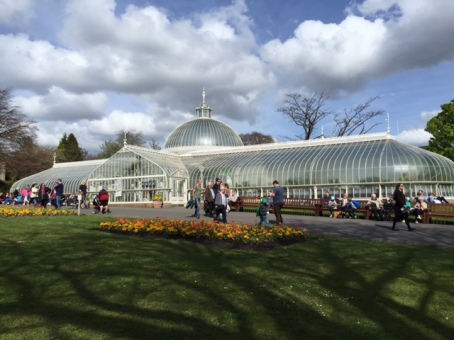 Glaswegians enjoy a midday stroll through the Glasgow Botanic Gardens.

This entry was posted in Travel and tagged do they say 'wee' in Scotland, Glasgow attractions, scotch in Scotland, Scotland, Things to do in Glasgow, travel to Glasgow, was Harry Potter filmed at the University of Glasgow. Bookmark the permalink.

One response to “5 things Glasgow taught me about Scotland”