Camping with kids made possible by motorhome

Before we had children my husband and I liked to camp. Backcountry or even front country, you’d find us heading west on many summer weekends. Now, the very idea of camping in a nylon tent with two children induces an instant headache. We tried camping with Avery when she was 14 months old and I wrote about that failed adventure for the Calgary Herald. 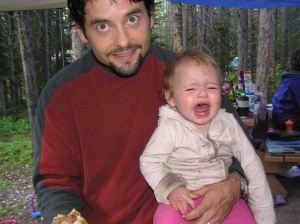 Camping with kids is a lot of work.

Six years later our daughter loves camping. She thinks it’s the best thing ever, after s’mores. Bennett, however, is not 100 percent sold on the glory of nature or the benefit of slumbering in its midst. More specifically: he hates fires. And fireworks. Really, anything crackling and hot with a flame. And camping without a fire is kind of like skiing without powder: you can still do it but it’s not going to be as much fun.

We became aware of his pyrophobia last summer, on failed camping attempt No. 2. All was going well in the great outdoors until it was time to roast hot dogs. As soon as the campfire was lit, Bennett retreated to the car and refused to come out. He then refused to go to bed in the tent, which was within earshot of the crackling fire. By refused I mean he screamed and cried hysterically blubbering, “No fire! Go away fire! Put it out! Waaaahhhhhh!!” (I’m sure other campers within earshot must’ve thought we were trying to brand him or make him walk on hot coals or some similar torture.) We ended up driving home at about 10 p.m. Our takeaways from that trip:

Fortunately, my in-laws took one for the team and invested in a motorhome. We borrowed it and “camped” at Gull Lake this past weekend.

Ah, nature! Got my barcalounger and a view of the throngs from the porch.

Inside its retro 1981 cabin Bennett felt as secure as if we were staying overnight at a motel. Outside, he was wary of the firepit, but we assured him there would be no fires. After he went to bed we closed the windows, drew the curtains and turned the fan on high (gotta love RV hook-ups!). Then, we lit a honking huge fire and made a bunch of s’mores. 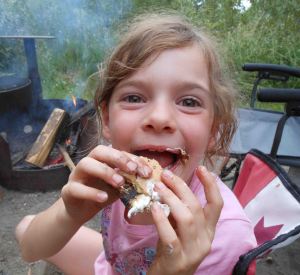 It’s not camping unless there’s a fire + s’mores!

This entry was posted in Potpourri, Travel and tagged camping at Gull Lake, camping with kids, my kid is scared of fires, RV camping. Bookmark the permalink.