Art is the latest “pop-up” trend

The phenomenon of pop-ups has taken off in North America, coming to Calgary in the form of a restaurant (Charpop), a lounge (Crowbar) and even a pop-up furniture and accessories store (Sit).

But the pop-up’s latest incarnation delivers it to the masses in an esthetically pleasing format: public art. Pop-up art falls into the category of urban intervention, where designers and street artists are starting to look at urban landscapes as something more than just utilitarian. In some cities guerilla swings have popped up by bus stops, giving commuters something to do while they wait, for example. Pop-up art, by contrast, gives passersby something to look at and appreciate while they walk or drive in the city. It pretties up the streetscape.

I first noticed pop-up art on some older buildings in the East Village, where a sort of upscale grafiti-style street art injected colour into the otherwise bleak (especially in winter) landscape. 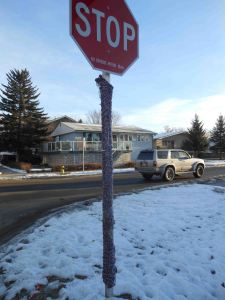 The trend has now migrated east into Inglewood. I’ve spotted several “stop-sign cozies” warming up the cold sliver poles — a practice known as “yarnbombing.” The neighbourhood’s grey utility boxes have also turned into three-dimensional works of art as artists paint them with city scenes and pictures of wildlife you’re likely to spot while walking along the Bow River or visiting the Inglewood Bird Sanctuary (deer, geese and even a Richardson’s ground squirrel).

The best addition to the hood — in my opinion — is a gorgeous mural covering what was once plain beige concrete supporting a train underpass that leads from the bus depot in Victoria Park under the railway tracks to 9 Avenue by Fort Calgary. Instead of a dingy underpass car passengers now marvel at a kaleidoscope of colours depicting a bird, a woman and a whole lot of flowing shapes and swirls. 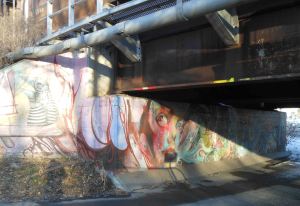 This underpass is way prettier thanks to a gorgeous mural painted this past summer.

Personally, I love this trend. I think it’s a great way to beautify community spaces and bring interest to tableaux that would otherwise remain utilitarian, ugly and add nothing to the urban environment.

How about you? Have you noticed any pop-up art in your neighbourhood? Do you like it?