For the birds: Birdwatching with kids at the Inglewood Bird Sanctuary

It’s that time of year in Calgary when there’s not a lot to do on the weekend. Fortunately, we’re not yet totally snowed in, so if it’s a nice enough day we like to get outside. We live in Inglewood, an inner city neighbourhood next to the Bow River that happens to be along the migratory path for various species of birds. It’s a short walk to the Inglewood Bird Sanctuary.

Now, you’re probably thinking, “What kids in their right mind would want to spend a Saturday afternoon bird watching at the Inglewood Bird Sanctuary?” It’s a valid question. My husband and I are hardly “twitchers” (that’s British for “hopelessly dorky birders”), but we like to see bald eagles and Northern flickers during walks around the ‘hood. We’ve also been hissed at by Canada geese when we get too close in the spring so we’re comfortable around feathered creatures. Our kids like to watch the ducks and geese take off and land en masse in the river, but the idea of the children crouching quietly in the bushes, with binoculars, for hours, waiting for a ruby-striped whatchamazoo to alight on a tree branch, is laughable. So to get their buy-in on these little nature outings, we bring bird seed. 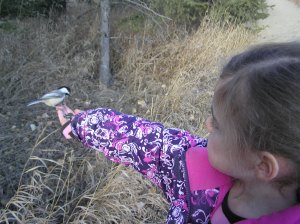 My daughter had no problem enticing a chickadee and a nuthatch onto her hand. The bird would only stick around long enough to grab a seed or two, then fly back to a tree. Tip: the birds prefer the hand held highest and filled with the most seeds. Rule sticklers take note: this practice is frowned upon. Serious adult bird watchers armed with telephoto lens cameras and bird books scowled in our direction, so my husband urged Avery to hide the seeds. But the birds were obviously famished and followed us around the lovely trails practically begging for more. 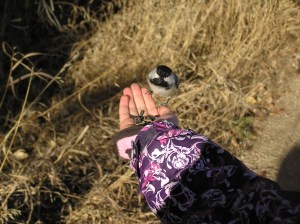 Who could say no to these beady little eyes?

We kept feeding the birds until the seeds made one of them spontaneously combust:

The glory of bird watching revealed.

At which point we high-tailed it home.