Back when I was writing about homestyle and interior design for the Calgary Herald, I never dreamed I would one day turn into the kind of person who buys a throwaway “Beware of Toxic Creature” sign from Dollarama. Motherhood has led me down the road of chintzy holiday decorating; more specifically, pleas from my daughter swayed me to succumb.

Avery also bought a toxic creature to accompany the sign. It’s on her head.

Avery: “Mommy, can we go to the dollar store this weekend to buy Halloween decorations? Please?”

It’s not that I’m a Halloweenie, I just don’t see the point of hanging up a bunch of cheap caution tape, fake spider webs and sock ghosts that are just going to blow away and get wrecked. Yes, it brings the children joy to admire these trinkets and those of the neighbours, but here’s an idea: What if we just carve pumpkins! Isn’t that enough? Do we really have to invest in a life-size coffin and skeleton to get into the spirit of the holiday?

Stumbled across this gem on an evening walk.

This over-the-top love affair with Halloween kitsch is new, and it’s but one way the holiday has changed since I was a kid. Now, everywhere you go you see faux skeletons bursting out of graves, animatronic witches stirring pots, and creepy zombie girls holding a brain to their mouth while they sing Ring  Around the Rosie. In my neighbourhood, it’s a thing, and it gains momentum every year. All of the above frights are stationed outside of homes within a one-block radius. It kind of puts our dollar store display to shame.

It’s also, I don’t know, terrifying if you’re a little kid just trying to get some candy. When Avery was two she ran home crying from the house at the end of our block after the motion-activated skeleton came to life when she got into range of the front door.

Bursting out of a grave near us.

One of the nearby homes that goes all-out is owned by a bachelor who doesn’t even have kids! His yard has morphed into a cemetery, and it’s watched over by a table peopled with Halloween horror hall-of-famers including Freddy Krueger,  Jason and Ghostface from the Scream movies. It’s a miracle Avery and especially Bennett will even walk by on Halloween night. (Storing this crap for the other 51 weeks of the year would be the other miracle.) 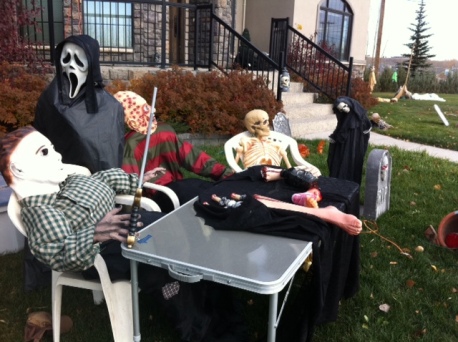 Jason, Scream mask guy and Freddy Kreuger hold court at The Zang, a neighbourhood home that goes all-out for Halloween.

When I was young, I’m pretty sure homes weren’t decked out with tombstones and tarantulas. There were carved pumpkins. So what’s changed? Mainly, Halloween has become a big commercial holiday — spending is expected to reach $7.4-billion this year, and I’m pretty sure it’s not all being dropped on candy and costumes (actually, $350-million will be spent on pet costumes, but I think I’ll save that topic for another post).

In the meantime, I’ll cringe inwardly at the tacky scene our front porch has become, but outwardly, I’ll smile every time Avery runs outside to adjust a spider web and ghost. I’m also content in the knowledge Avery only spent $7 at Dollarama (as opposed to $160 on the Rosemary Zombie Girl). True, she’ll have to buy some replacement props next year, but I’m okay with that.