It was an ambitious trip and a lot of time in the car for the kids. On “driving days,” of which there were seven, we averaged six hours on the road. The longest day, from Helena, Mont. through Yellowstone National Park to Dubois, Wyo. put us on pavement from 7:40 a.m. until 6 p.m. with numerous stops in between. En route we listened to playlists, let the kids watch movies and looked out the window at the ever-changing landscape, from mountains to geysers to badlands to scrub to prairie to mountains again. 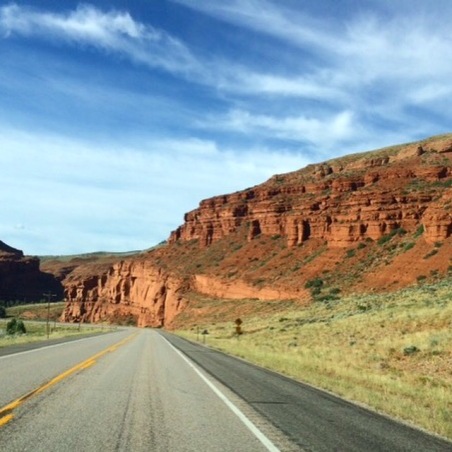 This was snapped through the windshield by Blake in Wyoming (note: he had just cleaned off all the bug guts from the window at a gas station, hence the clear view).

To make the driving part more engaging we played the license plate game, where you try and spot plates from all 50 states and 10 provinces (we didn’t see any territories). Avery took to drawing a symbol to represent each state; for example, a dollar sign ($) for Nevada, a polar bear being bitten by a mosquito for Manitoba, a cowboy hat for Texas. Since there are some states we know next to nothing about (I’m talking about you, Maryland), we just kind of guessed (Maryland got a hospital). Also, she kept pronouncing Missouri misery, so she drew a frowny face 😦 for that one. In all we saw five provincial plates and every state plate except Hawaii, Delaware and Rhode Island.

Avery drew symbols for each state we saw playing the license plate game. Nebraska and Iowa both got corn and Oklahoma warranted a tumbleweed (sorry). I think she learned a lot about the U.S., but not how to convert from Fahrenheit to Celsius.

Another thing we noticed on the road was A LOT of road kill. This is kind of dark, but we started keeping a tally of the various dead animals along the way including deer, antelopes, porcupines, foxes, racoons and rabbits. Fortunately this macabre count was balanced by live animal sightings such as elk, deer and tons of antelopes.

Finally, Avery kept track of weird sightings; unusual things you don’t see every day. Seeking shade in an underpass in Idaho we spotted two llamas being led by two men dressed in Peruvian garb. We saw a brick silo, a truck carrying Humvees, a train without any graffiti and a horse herd comprised of faux metal horses posed on a hillside in Montana. But it’s hard to beat the jackalope, that mythical Wyoming creature that’s a giant hare with antlers. As far as roadside attractions went, this gas station in Dubois, Wyo. was the best, symbolizing all that’s weird and wonderful about an American road trip.

Yes, you can ride the jackalope!

It’s official — our family is on the road. We’ve loaded up the SUV and pointed it southwest to Fernie, B.C. We’ll stay there a couple days, then drive west to Osoyoos, on to Vancouver, and end our holiday in Vernon.

I love the journey when the scenery is gorgeous! Pictured here: hay bales, canola fields and the Rocky Mountains in the distance en route to Fernie, B.C. from Calgary.

Leading up to our summer vacation I kept coming across stories with headlines like, How to survive family road trip hell. I read stories urging parents to involve children in the trip planning and others suggesting a ban on electronic devices (a return to the good old days of license plate alphabet). Curiously, all of these advice-y columns include the word “survive,” as if the act of driving from one place to the next with tots in tow is something to suffer through and hopefully come out of intact (or, at least, sane).

We’ve been driving to Fernie regularly with the kids for four years now and while at times I just want the drive to end, there’s a certain comfort in the familiarity of it all: turning west at Nanton, the hills and cows along Highway 22, the huge windmill after turning on to Highway 3, and of course, the World’s Largest Truck in Sparwood. But what I love about a driving holiday somewhere different are all the new sights to see and places to discover along the way. We’ll be breaking new road trip trails driving through Kokanee and Sasquatch country near Creston, and on through Castlegar and Grand Forks. Will the kids get car sick? Will the dog?  Will we, ahem, survive?

Of course, we bring tons of snacks and all the electronic devices to stem off boredom: DVDs, LeapPads, iPhone music and iPad games, but the kids spend a lot of time looking out the window like I did on the annual summer trip from Colorado to Kansas when I was little. Plus, our puppy Piper is a passenger with us this summer and that helps entertain the kids in the back seat.

We did a version of this trip two years ago, when the kids were six and three and it went surprisingly well. I am curious to see how we’ll fare this time. I will, literally, keep you posted. My aim is to upload at least one photo a day that encapsulates our adventures, with a couple of graphs describing the day and its high and low. Will we survive the family road trip? You be the judge.

Summer break is almost here and I jump-started road trip season with a jaunt up to Red Deer from Calgary to dump the children with their grandparents (my amazing in-laws) for a long weekend while I flew to Saskatoon for a conference.

On the drive up I let Avery play with my iPhone and she took this picture of Bennett with it:

I love this shot. Bennett’s just looking out the window, watching the fields and farms go by, as if absorbed by the vast prairie sky and endless pastures. He spent most of the drive looking out the window, occasionally pointing out horses or cows or a lone windmill. After awhile, we sang some songs (thankfully, not 100 Bottles of Beer on the Wall). And then, just like that, we were in Red Deer.

So often, as parents, we plan our road trips around DVD players, iPad or LeapPad games, or an endless supply of snacks. Feed them Pixar movies, rounds of Angry Birds or junk food to keep them busy, we think.

Why not fill their eyes with beautiful Canadian scenery instead? That’s what this image says to me. Its also means my kids are getting to ages where they’re able to appreciate the journey as well as the destination. Hooray! Bring on summer (and more road trips)!