It’s fair to say I’m on a bit of a Cointreau kick. I brought back a big bottle of the clear spirit — made from orange peels — from France, and I’ve been mixing margaritas, fizzes, white ladies and now, sours. I made this Cucumber Cointreau Sour using only muddled cucumber, lime juice, Cointreau, an egg white and a splash of water. It’s smooth, refreshing and tart, with that lovely, slightly sweet taste of oranges. Delicious.

This sour, made using Cointreau, makes a refreshing drink on a hot, end-of-summer, long weekend evening, whether in France or in Fernie.

I have to say I’ve been impressed by Cointreau’s ability to stand up in a drink as the base spirit. Prior to visiting the Cointreau distillery and museum in Angers, I had only used it in cocktails such as the margarita and sidecar where other spirits (e.g. tequila and cognac) do the heavy lifting. After drinking many a fizz in France (Cointreau, lime juice, soda water), I figured it would be lovely anchoring a sour, too. I was right.

In the base of a cocktail shaker, muddle the lime juice and 3 cucumber rounds. Add the Cointreau and egg white, then dry shake to emulsify egg. Taste, then add a splash of water if desired. Add ice and shake again, then strain into a rocks glass and add the 3 remaining cucumber rounds for garnish.

P.S. You’re not supposed to serve a sour on the rocks (as pictured) but it was so hot I couldn’t help myself. Gotta love our short summers.

P.P.S. I’m going to be writing more about Cointreau and Cointreau cocktails in an upcoming Spirited Calgary column in the Calgary Herald.

Drink of the Week: Farmer’s Martini

I finally made it to dinner at Downtown Food last weekend at the suggestion of friends. After eating what I can only describe as the best — and most creative — meal out I’ve had in a long time, I have to wonder what took me so long to get there. So, if you get a chance, go.

The restaurant also has an interesting cocktail list, featuring a drink with sake, one with lychee liqueur and three different martinis (not of the sweet variety). I opted for the Farmer’s Martini, a wise choice given my penchant for gin and elderflower liqueur. 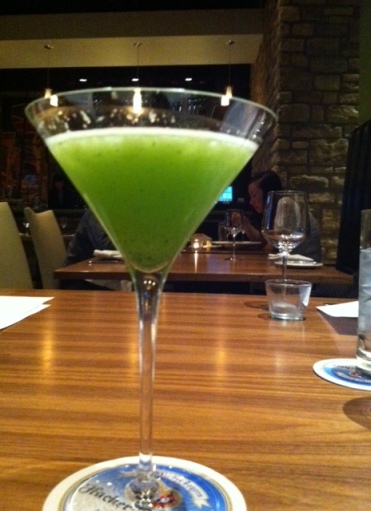 The Farmer’s Martini at Downtown Food is such a pretty drink. Bonus: it tastes good, too!

I’m guessing the name is a nod to its two farm-fresh ingredients: cucumbers and sage. No matter — this drink is awesome. Gin and cucumbers are meant for each other, but add in  lime juice, elderflower cordial and a hint of sage and you’ve got a savoury drink that’s both creative and refreshing. Enjoy!

In a shaker combine sage cucumbers and ice and muddle to crush sage. Add gin, lime and elderflower cordial. Shake, then strain into a martini glass. Top with soda water to taste. Garnish with a lime wedge and cucumber slice. (Drink should be bright green with flecks of sage and cucumber.)

*Cucumber puree: Using a hand mixer or in a Magic Bullet, pulse cucumbers with a bit of water or lime juice to make a puree.