If families aren’t being kicked off airplanes because of unruly toddlers, they’re being seated separately from their kids unless they pay extra. Many U.S. airlines have adopted seating policies whereby choice aisle and window seats are sold for an extra fee, forcing parents to cough up or risk having their kid seated between two strangers. It’s making people wonder whether airlines are anti-family, or simply using this strategy as a money-grab (probably the latter). 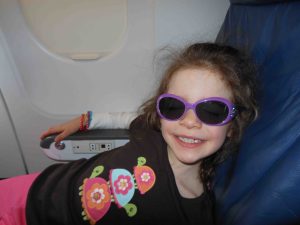 She’s cute, but would you want to sit next to her on a three-hour flight?

I found myself in this scenario in February when I flew from Calgary to Phoenix with my daughter on U.S. Airways. I went online to check us in and select our seats the day before we flew out (a practice I thought was free), only to find there weren’t any “free” seats left together. Available seats had little price tags on them — $25 or $35, depending on the seat. There were some middle seats available for free, but that wasn’t going to help me sit with my daughter on the airplane. Annoyed, I decided to sort it out at the airport — surely the flight attendants wouldn’t make a six-year-old girl sit between random strangers on a three-hour flight?

Yes, they would. The ladies at bag check, and then the gal at the gate, did a polite check, but the plane was full and there wasn’t any wiggle room. “You’ll just have to ask a passenger seated next to you if they’ll switch their seat with your daughter’s seat,” she said. Me, thinking the heartless airline should be the one to ask: “Can’t you do it?” Gate gal: “Wish I could, sweetheart. But trust me, you’ll have better luck if you ask yourself.” Evidently, other passengers already hated her.

“Mommy, do I have to sit by myself?” Avery asked, all big eyes and trembling lips. “Maybe. But probably some nice traveller will let us have their seat so we can sit together,” I replied. Well, the lady I asked to switch with Avery was nice … enough. I mean, she couldn’t really say no without looking like a big beyotch in front of the airplane audience. She gathered her things — I’m sure rolling her eyes and cursing her bad luck — and squeezed herself into the middle seat meant for Avery a couple rows back, probably between two obese travellers with B.O. So much for karma.

Or perhaps she sat between two Harlem Globetrotters — the team was on our flight — and was secretly glad to have a bit of leg room. That was our silver lining, anyway. When the plane landed, little Avery got to have her picture taken between two giant Globetrotters.

What about you? Have you experienced the frustration of not being able to sit together as a family without paying for the privilege? (Seems to me someone should pay for the privilege of sitting far, far from my children.)

Tagged airline seating with kids, airline travel with children, are airlines anti-family, flying with kids, paying to sit with your kids on a plane