The jury’s in: Jura Creek is a great hike for kids

The limestone walls on either side of Jura Creek canyon near Exshaw, Alta. beckon like the lost city of Petra. Only, instead of manmade buildings hewn from rock, your little explorers will find treasures of the all-natural kind: “staircases” of rocks and boulders to clamber up, “railings” made from logs wedged between cliff walls and “sinks” shimmering with crystal clear pools of water trapped in shallow rocky depressions.

For kids, there’s nothing more enticing than a narrow chasm to squeeze into and dry waterfalls to scramble up, and the thrills don’t really stop on the way back because you have to navigate the trail in reverse.

The kids loved scrambling up this ledge at the entrance to Jura Creek.

Ominously, not 50 feet in to the canyon we spotted a trail of blood (ostensibly from an injured rock climber or hiker exiting Jura Creek) and followed it all the way up, which lent our little adventure a Blair Witch vibe on a cool fall afternoon.

I had never even heard of Jura Creek until this past weekend. Nearby Grotto Canyon gets all the glory and perhaps that’s not a bad thing — we had the canyon and all of its kid-pleasing obstacles to ourselves for most of the hike. 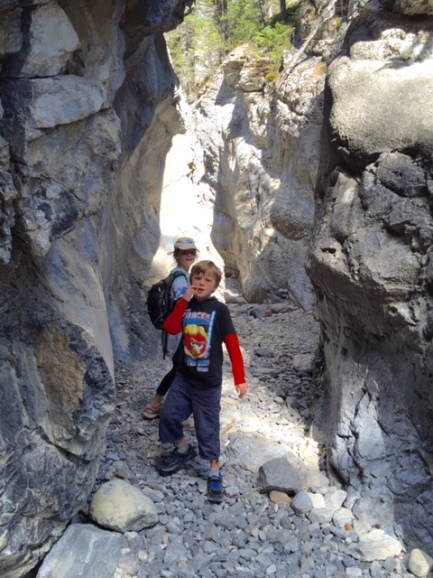 The canyon gets quite narrow in parts, and you can imagine the floodwaters of 2013 sluicing through the slots with force.

This narrow canyon has been eroded to reveal smooth limestone walls that curve and swoop as spring runoff has shaped it over the years. In fact, late summer/early fall is probably the best time for this hike, as the creek has mostly run dry so you don’t have to worry about slippery rocks or getting your feet wet. There were a few crossings where the water burbles up from underground, or where it pools in depressions, but these were easily navigated.

The most dramatic parts of the canyon — where you’re wedged between grey rock walls that tower above — are early on in the hike. After awhile the creek bed widens and the rock faces soften into forested hillsides. We hiked until the creek flattened out, and turned around at a spot where hikers before us had built a cluster of inukshuks. They’ll probably be washed away during next spring’s runoff, but we made one all the same — our own natural treasure for another family to find.

We ended the hike at a sort of Inukshuk shrine that’s been built up over the season in the dry creek bed. We celebrated by making our own contribution.

If you go: Finding the “trailhead” is a bit tricky as there isn’t a sign or anything. It’s basically a turnout off of Highway 1A on the north side (take the Seebe/Exshaw exit from Hwy. 1, head toward Exshaw on the 1A), just across from the Graymont Plant but before the town of Exshaw. Various dirt tracks and trails head west and north toward a valley; you’ll know you’re on the right track when after a kilometre or so you emerge from the forest and see the gravelly reclamation effort around the creek’s washout after the 2013 flood. Turn right (north) and you can’t miss the start of the canyon. 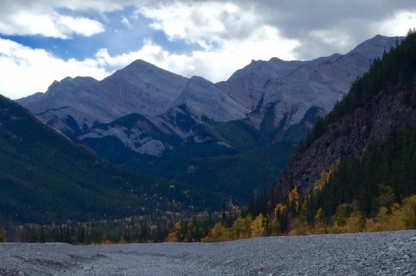 A view from the canyon entrance toward Exshaw. The gravel in the foreground is part of the post-flood effort.