Sleeping through the night

When you have a baby, one of the first questions friends ask you after enough time has elapsed is, “Is he sleeping through the night?” This milestone is viewed as the utmost achievement of babyhood, a feat far more applauded than rolling over, popping out a first tooth or even crawling. Seriously, show me what you can do when you’re unconscious, baby, and I’ll get excited!

Some moms have dream sleepers from the beginning, others sleep train when sleep deprivation threatens sanity, and a few struggle into the toddler years as zombie-moms, determined their kid will eventually stay in bed all night. Right? Right?! And then there’s Bennett. 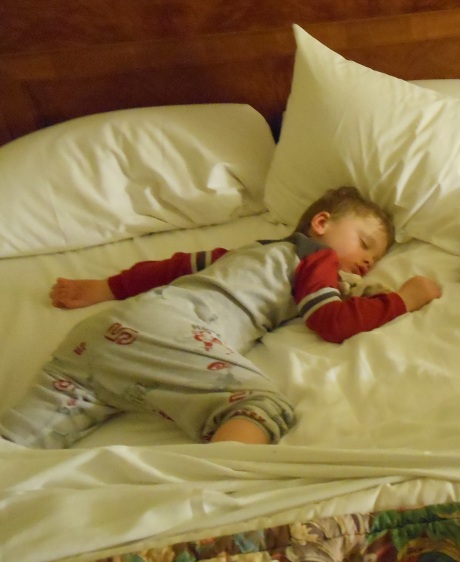 A poor sleeper from infancy, I hired a sleep consultant out of Vancouver to put together a sleep plan for my son when he was seven months old. He was still waking up several times a night and was difficult to settle after I nursed him. Plus he weighed, like, 20 lbs., and he no longer needed a midnight snack or three. The plan worked, and for a couple glorious years everyone in the family slept. Until we didn’t.

I blame the slippery slope back to night wake-ups on the big boy bed, where we moved him at age 3-1/2. He started getting up every now and then, and then it became a habit. Night terrors began at age four, and the night waking gradually grew worse until it got so bad we started seeing a “sleep psychologist” at Alberta Children’s Hospital two years ago. Who knew such a thing existed?

“Kids with autism are poor sleepers,” we were told. “Reward him with a sticker chart,” she suggested (he couldn’t care less about stickers). “Isn’t there something we could give him?” we implored. “Like a sleeping pill for kids?” Clonidine stopped the night terrors, but he kept waking up… unless he was sleeping next to his sister in Red Deer or Fernie. Then, oddly, he slept like a dream. We begged Avery to share a room with him in Calgary.

Life went on, a sleep study was performed and mild sleep apnea diagnosed (non-surgical). Our paediatrician recommended switching him to Intuniv, a new drug for kids with autism and/or ADHD, with the bonus side effect of better sleep. Still he woke up. And believe me, when your kid is seven, no one asks you (thankfully), “Is he sleeping through the night?” We stopped seeing the sleep psychologist.

All of this led me to pitch Today’s Parent magazine with a story idea about school age kids who are problem sleepers. When they assigned it I hoped to find a solution to help Bennett stay in bed. 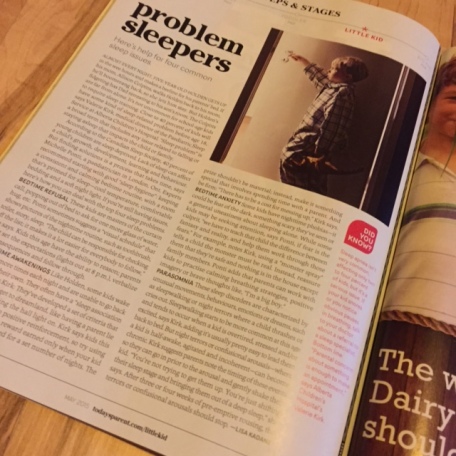 Even researching and writing a story about the issue didn’t help me find a solution.

We’d already tried most of the tips and tricks I uncovered from the experts. But then, about six weeks ago, something happened. Bennett slept through the night. And then he did it again a few nights later. Now, he’s staying in bed all night five or six nights a week. It’s a huge improvement.

Blake and I are almost afraid to question why this change has occurred, for fear we might jinx it. The best I can guess is that it was the combination of coming back from Costa Rica (where he slept great because he shared a room with Avery) and moving his Intuniv pill earlier in the afternoon. But who knows? I won’t question the amazing gift of unbroken sleep, but I will celebrate this milestone, finally achieved in childhood.

This entry was posted in Parenting and tagged how to get my school age kid to sleep through the night, my kid is seven and still wakes up at night, problem sleepers, sleeping through the night. Bookmark the permalink.