Who knew Canada celebrated a holiday feting its national cocktail, the Caesar? Evidently, May 14 has been named National Caesar Day — not sure by whom? — but no matter. We’re supposed to pour some vodka and clamato juice into a mason jar, add ice and spice, garnish the lot with a savoury meal (as pictured below), and then tip it on back.

Admittedly, I came late to the Caesar party, arriving in Calgary (birthplace of the Caesar) from Colorado. I wasn’t even a Bloody Mary fan, so my first Caesar was a disaster (“Yuck! What’s this foul creation?!”). I have since developed somewhat of a taste for a spicy Caesar, especially if bacon is involved in the garnish. We make them at home from time to time, but bonus if someone makes one for me. And double bonus if one arrives by mail pre-made, as happened earlier this spring.

The Uber Caesar is a pre-mixed bottled cocktail made by Crazy Uncle, a brand that’s trying to redefine the ready-to-drink cocktail (they already make a daiquiri, maple punch and mint julep). So, instead of bottling a bunch of sugar and preservatives, Crazy Uncle uses fresh ingredients (no MSG, no corn syrup and no artificial ingredients). In the Caesar, they make their own clam broth, and use fresh tomatoes and grated horseradish. The drink comes in a one-litre bottle with a packet of rimmer (celery salt, sea salt, lime peel and black pepper) attached. 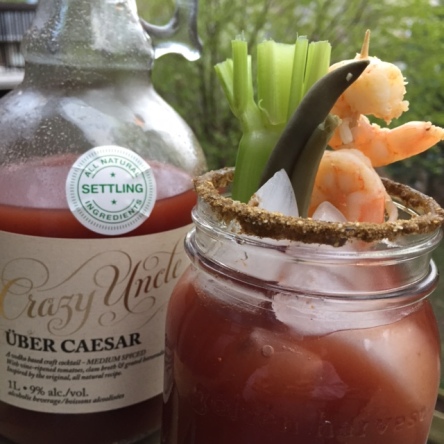 The verdict? This is a surprisingly good Caesar. It’s the right level of spice and thickness, and it tastes fresh, with a hint of lime and just enough vodka. My husband (way more of a Caesar expert than I am) really likes it too, though he would have added an extra squeeze of lime. Triple bonus: the Uber Caesar is now available in Alberta at The Liquor Depot. So drink up!