Blake and I are tackling Fernie’s famed Mountain Lakes Trail (known locally as Heiko’s Trail, after Heiko Socher, the long-time Fernie resident who built it) in late July. It’s a challenging 20-kilometre day hike that will take us up 1,400 metres of elevation, over two passes and around the flank of Mount Fernie on a long alpine traverse before dropping us back down 640 metres and depositing us on the Island Lake Lodge patio for a cold beer eight to 10 hours later. 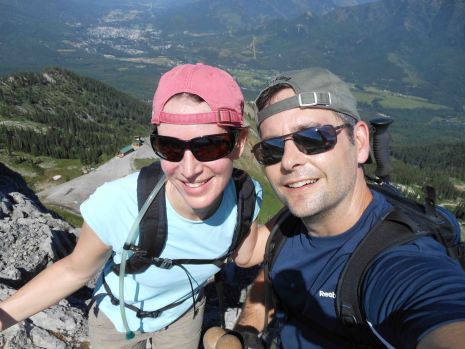 The last time we tackled a difficult hike in Fernie was when we were training for Kilimanjaro in 2012. Here we are on the Polar Peak loop.

Since our urban bodies would suffer greatly if we stumbled into this epic hike unprepared, we have embarked on a series of training hikes. Over the next five weeks we plan to knock off three or four day hikes that will become progressively harder and hopefully make Heiko’s feel like a cake-walk when the day comes (I can dream, right?).

Embarrassingly, our first “hike” hardly qualifies as a hike, since most Canmore residents consider the Grassi Lakes Trail a morning warm-up (the more fit among them have been known to run the four-kilometre loop daily). Also, I’m pretty sure I huffed past a couple of toddlers on Saturday — whom I might add were walking under their own power — so that should give you an idea of the walk’s ease. There are two ways up to Grassi Lakes: we took the more “technical” trail that switchbacks up along the waterfall and stream; the other, easier route is more like a gradual logging road that’s popular among Moms and Dads pushing Chariots (we chose this path for the descent).

The lakes get their colour from minerals in the water.

Regardless, the hike provides a decent enough ascent (165 metres) for a first-hike-of-the-season and at the top you’re rewarded with nice views of Canmore and the Bow Valley as well as photo ops by the two stunning tourmaline-coloured lakes (the lakes and trail are named for Lawrence Grassi, a coal miner-turned-mountain guide who built the trail). At the top it’s fun to stop and watch rock climbers attempting various routes up the surrounding dolomite limestone walls, which have natural holds from erosion. 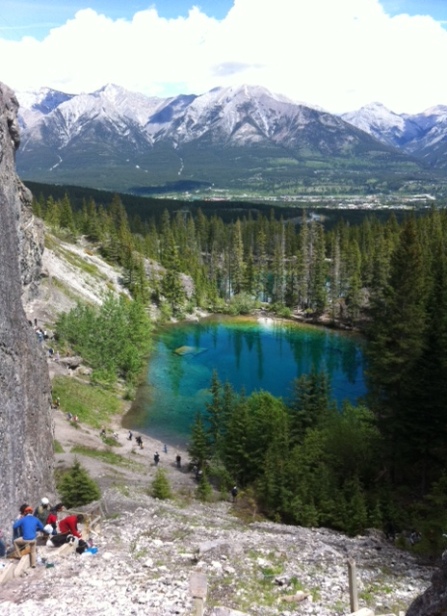 Climbers (on the left) love the cliff walls that tower above Grassi Lakes because they’re riddled with natural holds.

To make the hike more challenging we brought along Piper, our Brittany yearling. She still walks like a bit of a yo-yo on leash, zigzagging hither and yon, so we had to constantly watch where we were stepping to avoid her paws. At the lakes we continued hiking up to Spray Lakes Road, where Piper had a swim in the reservoir, then we turned around and headed back down. 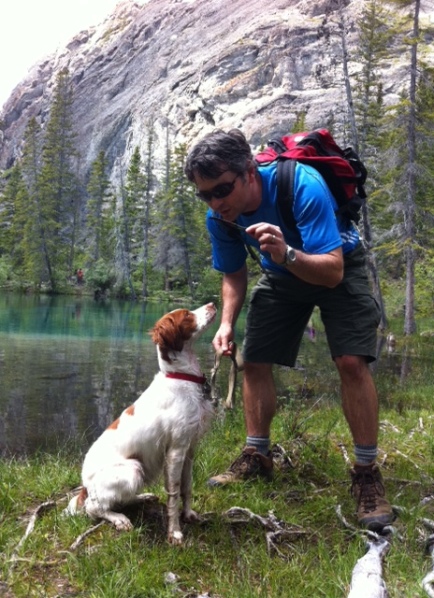 Piper poses by one of the two Grassi Lakes after her first Canmore hike.

Drinking cold beers and eating delicious paninis on the Mountain Mercato patio on Canmore’s main street while Piper sunbathed on the adjacent sidewalk proved a perfect reward for a day well spent in the mountains.