What makes a movie “autism friendly”? To find out, we headed to Canyon Meadows Cinemas this past Saturday to watch the animated children’s movie The Nut Job.

The Nut Job is just an okay movie (Bennett much preferred Frozen), but “autism friendly” is more about the theatre environment than the show itself.

Calgary’s cheap seats theatre has committed to showing one children’s movie a month in an environment that turns the notion of “blockbuster” on its head. Instead of showing a 3-D movie in a pitch-dark theatre with loud surround-sound — and expecting tots to stay glued to their seat for two hours — the cinema screens a show inside a theatre with an autism-friendly ambiance. What does that mean? This:

I admit I have avoided taking Bennett, my six-year-old autistic son, to the movies for years — the kid has only seen three movies in a movie theatre in his life! I stayed away because I worried he would freak out about something in the film, throw a tantrum over spilled popcorn or demand we leave half way through the show. The fact that Canyon Meadows creates an environment once a month that makes it okay for Bennett to do all these things, is awesome. No more worrying about being judged (that I’m a bad parent, or that my son is misbehaving) because the other parents in attendance get it. 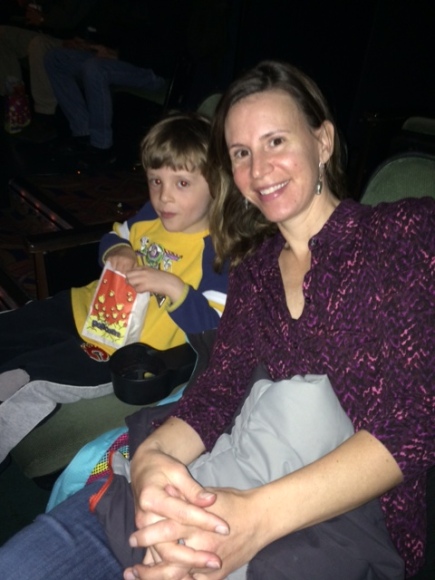 As it turned out, Bennett didn’t take advantage of the autism-friendly perks. He ate his popcorn and sat in his chair for the movie’s duration, with nary a word of protest. Other children walked around in the front of the theatre, made noises, occasionally cried. But it wasn’t a big deal because we understood. And, if Bennett had wanted to leave half way through the movie it wouldn’t have been a big deal, either — tickets cost just $5. It’s great Canyon Meadows is doing this regularly. Keep it up!