Four years ago we bought a betta fish for Avery as a reward for giving up her soother. Since her soother’s name was Blue-blue, she named her betta fish after it, naturally.

Blue-blue in his prime near his third birthday.

Blue-blue is now four years old and when we tell other parents how long we’ve had the fish their first question is, “Is it the original fish?” Yes. A quick Google search reveals that the average life span of a betta is between two and six years, in fact. Still, it’s pretty much a miracle Blue-blue’s still with us. Sometimes we forget to feed him. We often go three weeks between bowl cleanings. He was even uprooted from his home during the Calgary flood.

But Blue-blue keeps on swimming twice a day to retrieve his little food pellets from the top of the bowl. Between meals he kind of lays on his side at the bottom. He’s also changing colours; from a lustrous purple-blue to a mottled purple-grey. He looks like he’s dying, a fact that is not lost on Avery. 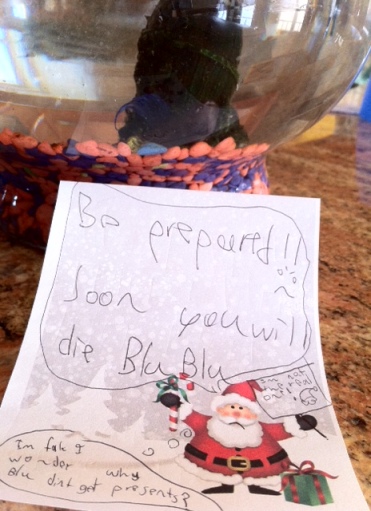 Blue-blue on the bottom of the bowl, next to this ominous note written by Avery about a week ago.

They say the death of a pet is one way to teach kids about the cycle of life. I wonder, will Avery mourn Blue-blue like she did the soother he replaced? Or will her first question be, “Now can I get an eel?” I have a feeling that when our geriatric betta fish finally passes on and is flushed into the dark reaches of the Calgary sewer system, we as a family will have only learned one lesson:

Dogs are way better pets than fish. (And no, you can’t have an eel.)

This entry was posted in Potpourri and tagged beta fish longevity, how long do betta fish live for. Bookmark the permalink.