My man’s growing a mo!

Sporting eight days of stubble after climbing Mount Kilimanjaro last year, my husband Blake could hardly wait to have a hot shower and a shave when we arrived back in Arusha. But instead of completely shaving off his mountain-man facial hair, he left the fledgling moustache in place, as a joke for our fellow trekkers when we joined them for celabratory beers at the hotel bar.

Turns out the joke was on him, as seemingly no one noticed his attempt at being ironic — or his thin and wispy ‘stache. Eight days was simply not enough time to properly grow the hair on his upper lip. This time around, Blake has a whole month to grow a mo, as he recently signed up to be a “Mo Bro” during the annual Movember campaign. Will anyone besides his mortified family members notice this facial affront to all-things-suave? We’ll see.

Mo Peach Fuzz is the name of Blake’s Movember team.

Blake got the idea to grow a mo during the Movember launch party at Libertine Public House in Calgary in October. He wants to raise money for men’s health and also to spice up our love life (we’ll see how that goes). The annual campaign uses that in-your-face symbol of manhood — the moustache — to get people talking. Blake’s ‘stache will no doubt be a conversation starter. If you’d like to help out, please donate to Blake Ford at Mo Peach Fuzz.

My husband is no stranger to facial hair. When we travelled around Asia in 1995-96 Blake not only grew his hair down to his shoulders to spite a hair dresser who’d told him prior to departure that he’d never achieve pony tail-length locks — he grew a beard. 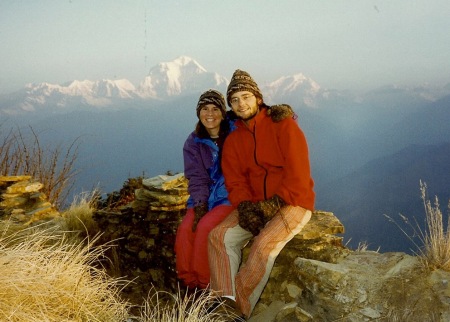 Bearded and be-toqued in Nepal.

Then, rather liking the look of hair around his mouth, Blake sported a van dyke — the more handsome sibling to a goatee — from about 2002 until 2007.

He’s remained clean-shaven ever since, except for those times when — as in Africa — hot running water and a mirror weren’t readily available. The rules for Movember dictate that the moustache not adjoin any hair on the chin; it must be a stand-alone mo. So a van dyke is out, but a ‘stache with a soul patch or big mutton chops is a possibility. Another question is which style of moustache should Blake grow? The Lanny McDonald and Fu Manchu are out of the question, given the time constraints. Which leaves us with the Clark Gable, Magnum P.I. or Hitler (never very popular, as you can imagine). Feel free to weigh in!