The great thing about visiting a city for the first time is that everything is new. Every street leads to place you’ve never been before, whether it’s a famous monument, a hip restaurant or an urban beach. Such was our 48 hours in Chicago, an American metropolis that’s been on our “U.S. cities to visit” list for years.

Chicago surprised and delighted in so many ways, but the highlight for me was its built environment. Here’s the view from the 96th floor of the John Hancock building.

You also learn little tidbits about your destination that make it real, like the fact that Chicago’s nickname is Chi-Town (who knew?), or that Bears fans wear the coolest scarfs to home games, or that Chicago suburb Oak Park boasts both Frank Lloyd Wright’s home and studio and Ernest Hemingway’s childhood home.

Other than expecting wind and deep dish pizza I didn’t really know what Chicago was all about until we tromped out of the ‘L’ at the Loop and found Hotel Monaco, our home for two days. It was late and all the buildings along Chicago River were lit up including the gothic-topped Tribune Tower and its contemporary neighbour the Trump Tower Chicago. I’m a sometimes-arichtecture fan and this was a wow moment, to be followed by many more over the next two days. Here are our Chi-Town highlights.

1. All the tall buildings

It’s staggering to look up on holiday and realize that probably half of the skyscrapers are taller than your city’s tallest building. And yet that happened around every corner in Chicago, where the Willis Tower, John Hancock building and Trump Tower all top 90 stories. (That’s almost twice as high as the Bow, in case you were wondering.) But it’s not just the size that’s so impressive as the design. No boring modernist rectangles, these. I was particularly taken with the Tribune Tower, an art deco beauty with a gothic top that includes flying buttresses. A close second was the Carbide and Carbon building, an art deco masterpiece that looks like a stylized bottle of champagne. 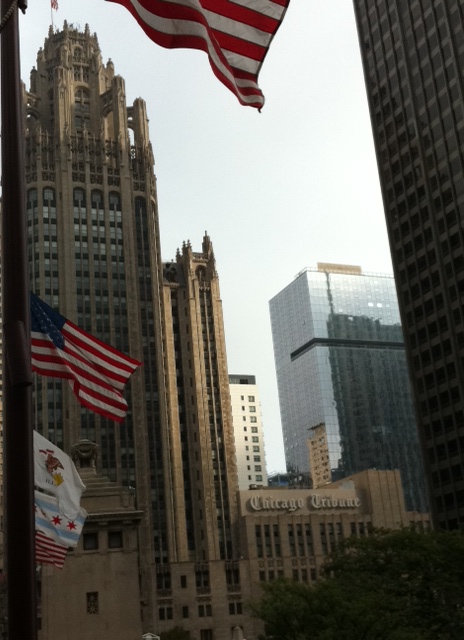 Maybe it’s just me, but the Tribune Tower has Gotham City written all over it.

We spent a long time enchanted by Cloud Gate, an elliptical “bean” sculpture by artist Anish Kapoor that captures your attention as you walk around it and see the city (and yourself below it) reflected at various angles on its mirror-like surface.

Blake pauses in front of Cloud Gate in Millennium Park, alongside his Divvy Bike.

It seems you’re not truly a modern city these days unless you have a bike sharing system. Chicago’s Divvy Bikes, with 4,000 bicycles located at 400 stations across the city, make it easy to explore this large, flat metropolis. We hopped on at Oak Beach and rode south past Navy Pier to Millennium Park before heading over to Frontera Grill for lunch.

Yes, Chicago has beaches. While they certainly wouldn’t be tempting on a January day, we saw people playing beach volleyball and even swimming in Lake Michigan on a balmy October Saturday. Right downtown! There are even waves. 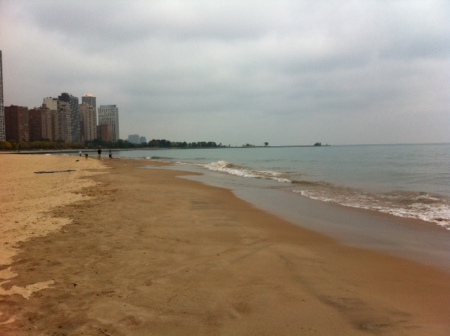 A lovely beach in downtown Chicago.

While I wouldn’t go so far as to say I’m a fan of Chicago deep dish (I prefer the artisan thin-crust pies that Calgary’s Una and Without Papers make), I was impressed with the diversity and creativity of Chi-Town’s food and cocktails. I had a delicious mole enchilada and a whiskey barrel-aged mezcal negroni at Frontera Grill, and we sipped a ginny number called The Lake Effect and nibbled on a plate of duck tongues, followed by delicious grilled baby octopus at Girl and the Goat.

Admittedly, 48 hours was barely enough time to experience all that Chicago has to offer, but our weekend jaunt left me wanting more. I’ll be back to Chi-Town!