Drink of the Week: Coco Loco

Some years ago on vacation in the Dominican Republic we discovered the tastiest of cocktails at the swim-up bar: the Coco Loco. The bartender whipped up a bunch of booze and, presumably, coconut milk, and served it to us in a fresh coconut with a straw poking out of a hole in the top. The drink was so yummy — and free (hello, all-inclusive!) — the next thing we knew we’d ordered a couple more and were “loco” (Spanish for crazy) from the coco in no time. 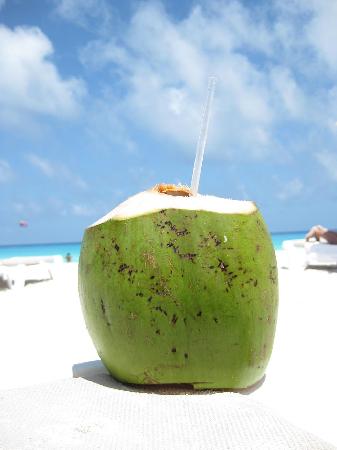 This is how they serve them in the Caribbean. In Canada, a wine glass works fine.

I had no idea what the other ingredients in a Coco Loco might be, but I guessed rum was involved. So when I received a bottle of Malibu’s original coconut flavoured rum I decided to try and replicate the DR’s deliciousness at home.

I discovered that Coco Loco recipes vary widely. Some call for vodka in addition to rum (for a Coco muy Loco), others include creme de bananas and still more omit the pineapple altogether. I settled for a recipe featuring  amaretto, hoping to capture that sweet, slightly nutty flavour I recalled.

While my version is pretty good — sweet, tart pineapple and creamy coconut with a hint of almonds — I liked the DR Coco Loco better. Must be the coconut cup!

I like Malibu in this drink instead of regular light rum. It adds an extra “coconuttiness” and makes up for the lack of coconut cream.

Combine ingredients in a blender and puree until smooth and frothy. Pour into a wine glass (or hollowed-out coconut) and garnish with a pineapple wedge.

This entry was posted in Potpourri. Bookmark the permalink.

2 responses to “Drink of the Week: Coco Loco”