“The plane is overweight”

They say the glory days of airline travel are long gone, and after our trying transit through the Houston International Airport yesterday I have to agree. 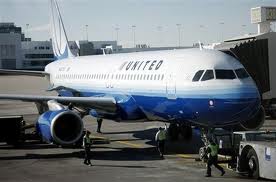 After a 90 minute delay (reason unspecified) we boarded our 50-passenger United Airlines flight to Little Rock, Ark. They promised we’d be underway as soon as possible, and apologized again for the delay, but the airplane remained motionless on the tarmac and the minutes dragged on. Bennett — exhausted from our 4 a.m. wake-up, the four-hour flight to Houston from Calgary, and the three-hour layover — fell asleep with his head on my lap. We waited. I fantasized that if the plane took off right then he would sleep the whole way. Ha!

After about 20 minutes, an announcement:

“We’re real sorry folks, but it looks like this airplane is overweight. By law we cannot take off until three passengers volunteer to get off the flight. We can offer a $500 travel voucher for each volunteer.”

Initially I thought our fellow passengers would come to fisticuffs over this appealing incentive, but when they found out there wasn’t any availability on later flights to Little Rock that day or the following day, only one lady came forward. In fact, United’s offer — in addition to the $500 — was to fly the people to Memphis, Tenn. and then bus them two hours to Little Rock. Graceland aside, who’s going to volunteer for that?

At this point there was much under-the-breath grumbling about an airline that flies planes that aren’t able to carry the same number of people as seats. I mean, isn’t that kind of an obvious design flaw (or has the American obesity epidemic gotten that bad)? What was more frightening was wondering what would happen if an overweight plane took off. Would we fall out of the sky over Texarkana like a doomed Aeroflot jet?

“I am sorry, but we really can’t fly an overweight plane. If we don’t get two more volunteers we’re going to have to choose people at random to get off the plane. I know, it’s pathetic. It’s shameful. But that’s the reality.”

Well, here’s a reality check, United: Get your shit together. If there’s a good chance your plane will be too fat to fly, don’t sell as many seats. It’s shocking the flying public puts up with being treated with such disrespect. We already deal with unfriendly flight attendants and nickle-and-diming for everything from in-flight snacks and entertainment to checked baggage, and now this. We all just showed up with our paid-for plane tickets expecting to receive decent service and a flight to our destination. No one thought the day would turn into a waiting-game nightmare, with an airline threatening to pick two innocents at random and then doom them to a day from hell flying to Tennessee to get to Arkansas. Pathetic and shameful, yes — at least the announcer-guy had the balls to speak the truth.

When still, after another 15 minutes, there were no takers, another announcement.

“We’ve just received word from United that we can offer $700 for the volunteers. Plus we’ll pay for your overnight and meals in Houston. Please, folks. By law we cannot fly an overweight plane.”

Well, it must’ve been the extra two hundie because United got it’s saccrificial lambs. And we finally got the hell outta Houston. Of course, poetically, Bennett woke up right as the plane started taxiing to take off. The combination of being over-tired and slightly disoriented threw him into tantrum mode for a good 15 minutes. Normally, I would have been mortified but this time I didn’t care — after all, everyone had been given the chance to get off the flight for $700.

What about you? Any United or other airline horror stories?

4 responses to ““The plane is overweight””