I should have guessed the tours into Kartchner Caverns near Benson, Ariz. would be un-kid-friendly by the sign that greeted us at the registration desk inside the state park visitor centre. It was basically a list of items not allowed inside the caves including:

After my children wandered through last week I’m sure Peggy, our verbose guide for the duration of the hour-long tour, will add two more no-nos to the list:

You would think a cave would cater to kids, being all dark and drippy and underground, with bats and piles of guano. That was our thought, anyway, when we veered off Highway 10 and headed south. 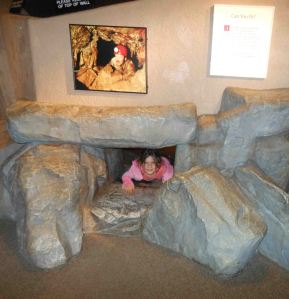 Kartchner Caverns State Park protects a living cave system that tunnels through a limestone block under the Whetstone Mountains in southern Arizona. “Living” means the formations inside are still growing. The caves were discovered in the 1970s and have remained virtually unchanged since then. There are both stalagmites and stalactites, as well as flow stone that looks like raw bacon and long soda straws (thin, hollow mineral tubes) that, according to Peggy, are so fragile, “If you sneeze near one it will fall to pieces.”

This is what my camera would have captured if I had been allowed to bring it into the cave. The rationale for no cameras? “The flash might disorient someone.”

Being a geologist, my husband was keen to go. Being a parent, I figured spending an hour inside a hermetically-sealed underground cavern with an autistic five-year-old was a peachy plan. What could go wrong?

Since our children were the only kids on the geriatric-weighted tour, Peggy paid close attention to us from the get-go. She first ordered Blake to spit out his gum, lest he forget himself and hork it toward a stalagmite once inside the cave. After we entered the man-made tunnel that leads underground, Peggy instructed us to remove our jackets and roll them up before tying them around our waists, lest tiny lint fragments somehow befoul the ancient limestone formations. And under no circumstances were we to touch ANYTHING, save the paved pathway and the railing. “Touching the formations is punishable by law!” Peggy said, looking squarely at Bennett. Evidently, the oil from our hands is bad for caves. It gives them zits and then no one visits anymore.

I’m sure the “touch” perps in this photo are incarcerated in an Arizona prison.

Peggy pulled an orange wrist band from her pocket. “If anyone touches anything inside the cave, I will tie this around their wrist so everyone knows who did it.” Great, public shaming! “Then, we mark the spot they touched and a team enters the cave after closing and hand washes it.” Good to know were were touring the Mommy Dearest cave. I mean, seriously? It’s a cave, not the Mona Lisa. So of course, as if to test her, Bennett immediately put his hand on the venting system in the manmade tunnel. “Son! No touching!” she scolded. This was going to be un-fun.

So OCD are cavern officials, you can’t even touch man-made stuff en route to the caves.

We entered the cave. The door closed behind us. I shadowed Bennett, waiting for a misplaced finger to incur Peggy’s wrath. It didn’t take long — unbeknownst to me Bennett had been trailing his hand along the rock wall. “Son! Absolutely no touching! We take this very seriously!” I waited for what I assumed would be one of many orange wrist bands to decorate my son’s arm, or at least for the CSI-Kartchner team to file in and flag the yard of contaminated rock, but nothing happened. From then on I held his hands. Not long after, Avery’s cowgirl hat fell off of her head and onto a pile of rocks. This caused some panic amongst Peggy and her two helpers. “Can’t we just grab the hat?” I asked. “We’re not sure ma’am.” It was like a crime scene, where you couldn’t move anything. Perhaps her hat would remain in the cave and morph into a hatagmite over the millennia? She eventually got it back.

Avery, hatless, poses by a fauxmation in the visitor centre.

The tour culminated in a large cavern in front of the cave’s largest formation, a stalagmite called Kubla Khan, so named in honour of the ruler of Xanadu (a fictional cave kingdom) in the poem by Samuel Taylor Coleridge. Peggy made us sit through her pretentious recitation of the poem, then she turned on some tribal-sounding music and we watched a sort of light show illuminate various formations in the vast cavern. It was meant to be a solemn and awe-inspiring finale, but I really wished Bennett had chosen that moment to belch the alphabet, or at least fart loudly, to steal Peggy’s thunder.