As we were walking down the pathway toward Elbow Falls in Kananaskis Country this past weekend my daughter spotted a cougar. Thankfully, it was not a live cougar (neither the mountain nor urban variety), but the pelt of one (the mountain kind), head and all. A volunteer from Bow Valley WildSmart wore it around her shoulders like a stole to get families’ attention and thus educate them about “living smart” with wildlife. 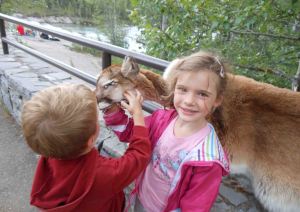 Q: What’s better than petting a cougar pelt?
A: Sticking your hand down its throat.

But we weren’t there to learn stuff so I marched the kids over to the waterfall-viewing platforms. 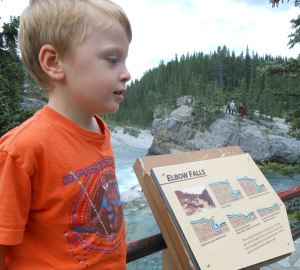 Bennett looks longingly back toward the cougar.

OK, now that’s a waterfall. (Avery deemed Elbow Falls too “lame” for a photo with her in it.)

After we observed Elbow Falls from every vantage along the trail (according to Avery Elbow Falls is kind of “lame” because it’s not bigger than our house), both kids wanted to wander back to the cougar. Lucky day! There was also a grizzly bear pelt available for petting, manned by a volunteer from Friends of Kananaskis.

Truthfully, Avery and Bennett were more interested in stroking both pelts’ soft fur, touching the grizzly’s sharp claws and sticking their hands down the cougar’s throat, than learning about playing dead should they encounter a bear in the woods. 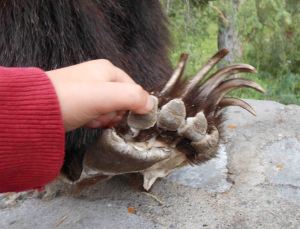 Bennett vs. grizzly claws. Though he’s loathe to have his nails trimmed, I still think the griz would win.

Besides, I like to think I’m fairly “wildsmart” — I never leave bacon or gutted fish out at the campsite, only vegetables and open jars of peanut butter. Kidding! The volunteers handed out brochures with wildsmart tips — good information about what to do during wildlife encounters when hiking or camping with kids. The only problem was I then had to explain some things to my children, who had just spent 10 minutes petting and playing with what, in their world, equated to life-size cougar and grizzly “stuffies”:

But seriously, Elbow Falls is a hugely popular day-trip destination and many picnickers may lack knowledge about handling human-wildlife encounters. I think it’s great Bow Valley WildSmart and Friends of Kananaskis are taking the initiative to educate visitors about sharing nature safely with the critters. Plus, they kind of saved the day with their pelts: for kids, wild animals trump wild water any day.