No gift bag left behind?

Back when my eldest was a toddler and took no interest in her birthday party beyond the cake, I vowed I would never adopt what I viewed as unsavoury kids’ birthday party practices. Namely:

This past Friday, at our daughter’s seventh birthday celebration, I realized I have broken all of my party promises. We let Avery invite nine friends to a gymnastics bithday party at the Flip Factory and handed out goody bags when it was over. These slips aren’t really a big deal since outsourcing a party is arguably easier than hosting it in-house (the entertainment is taken care of and the mess is minimized). And really, what’s a couple more friends when there’s a huge gym to run around in?

Gymnastics for an hour followed by pizza, cake, presents and gift bags.

Which brings us to gift bags. Even though a parenting trend prediction for 2012 suggested gift bags were on the way out, it’s daunting to defy party tradition and forego the little party thank-yous, especially when six- and seven-year-old girls covet them. So I stocked up on craft graft from Michaels and Jolly Ranchers from Dollarama and put together what I thought was a pretty kick-ass gift bag:

If China didn’t exist, neither would gift bags.

And yet. One little girl left her gift bag behind. Did she deem the contents unworthy? Had she and her parents vowed to eschew the tradition of gross birthday over-consumption by just saying no to the loot bag? Or did she simply forget to take her gift bag home with her? 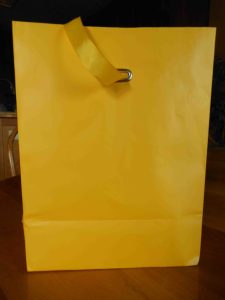 I’ll never know the reason the yellow bag stayed at the Flip Factory that evening. But I like to think that, in Grade 1, my daughter’s friend took a look inside and thought, “Do I really need some lame Made-in-China crafts and teeth-rotting candy?” And then left the gift bag behind.

Should gift bags go the way of the dinosaurs or should we embrace them? Thoughts?

8 responses to “No gift bag left behind?”