Back in the saddle: Horseback riding in Arizona

It had been nine years since I last sat astride a horse when I pulled myself onto Copper — my trusty steed for 90 minutes — at the Koli Equestrian Centre, part of the Sheraton Wild Horse Pass Resort & Spa on the Gila River Indian Reservation in Chandler, Ariz. last weekend. It had been three years since Avery “rode” a horse, and Cannonball Bob would be the first horse she attempted to rein herself.

We were in Chandler, Mesa and Tempe (all part of greater Phoenix) as part of a Sunny Arizona media trip. We’d bounced around at Jump Street (a giant indoor tampoline park), held sea stars at the Sea Life Aquarium and fed stingrays at the Phoenix Zoo. But Avery was most excited to ride a horse in Arizona’s Sonoran Desert. All by herself!

Copper is ready to roll out.

Guide Emmett Miguel led us out of the corral and it quickly became apparent this would not be like most trail rides. You know, the kind where your horse’s head is smooshed up against the tail of the horse in front of you. Instead, we rode side by side; or, more truthfully, Miguel, myself and two other riders flanked out in front, with Avery trailing far behind on Cannonball Bob. 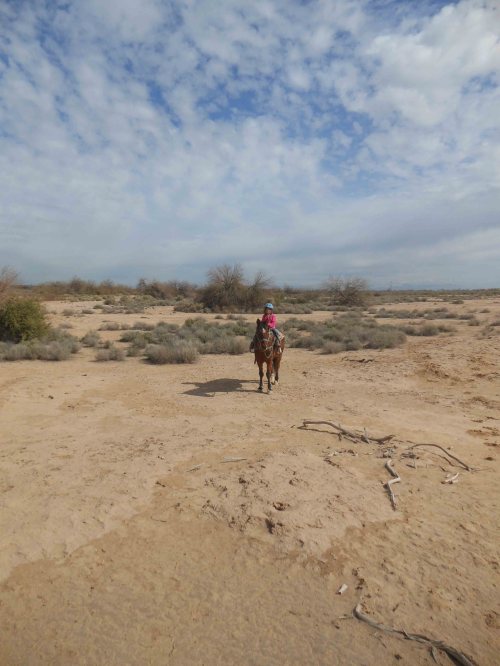 Possibly the biggest misnomer in Arizona's horse history, Cannonball Bob was, in reality, about as fast as a hand-thrown paper airplane.

At 17, Bob was the oldest horse in the stable and thus deemed safest for a six-year-old greenhorn like Avery. He plodded along, following us at great distance. The reins sat limp in Avery’s hands — though she’d been given instructions on how to use them, she just let her mount do his thing. Which he did. Verrrry. Sloooowly. Every now and then Miguel would ride back and encourage Bob to pick up his pace.

Given Bob’s glacial walk, we probably didn’t cover quite as much ground as a typical 90 minute ride, but it was still enough to see three coyotes, two jack rabbits, four wild horses (it isn’t called Wild Horse Pass for nothing), a circling hawk and some Saguaro cactuses (yes, it’s cactuses, unless you’re Latin) in the distance. As we rode along dusty trails and across parched desert flecked with sage bushes, Miguel recounted bits of native folklore, including the tale of how coyote convinced roadrunner to ride across the river on his back (and guess who ended up in coyote’s belly?): “That coyote, he’s a trickster. He’ll pretend he’s your friend, but he’s not.” “A roadrunner is a messenger. If you see one, turn your hat around backwards so it will be a good message.” And finally, “If a hawk crosses your path, it’s a warning.”

This part of the Sonoran Desert is pretty bleak. I expected Copper to stumble across skeletal remains at any moment (maybe that's why the hawk was circling?).

Right on cue, a hawk crossed our path. I’m pretty sure his warning was this: Beware sore legs and a sore bum after horseback riding. And: beware a very thirsty six-year-old after a 90-minute inaugural ride. And also: beware a sunburn. Noted. And so worth it.