In a recent story in the Washington Post, writer Janice D’Arcy asks if drinking while parenting is a good time or a problem. It’s an interesting question to ask, especially in light of recent books such as The Three-Martini Playdate by Christie Mellor and Naptime is the New Happy Hour by Stefanie Wilder Taylor, which imply that rearing children is such a buzz-kill, it’s easier (and more fun) to parent while buzzed. Incidentally, Wilder Taylor has now admitted publicly to an alcohol addiction, which was the basis for the story in the Washington Post. The message seems to be: if motherhood is driving you to drink, well, maybe you shouldn’t. 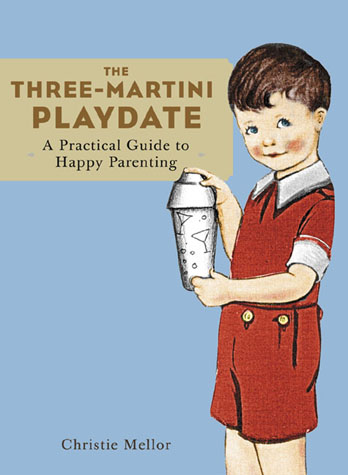 Author Christie Mellor has fun -- and a cocktail -- while parenting.

While I’m the first to admit that I like a good cocktail, especially a Perfect Margarita, I also usually consume just one. When the kids were younger (read: needier, more taxing) there were times we mommies would get together and have a couple glasses of wine while we bemoaned our new lives of diapers, night wakings and dislike for playing Sir Topham Hatt (of Thomas the Tank Engine fame) with our toddlers ad nauseam. I’m sure for most of us the need for group w(h)ining has waned as the children have gotten older (read: are potty trained, sleeping through the night and attending school full days). (Note: we never hit the bottle alone in the closet, a la Sue Ellen of Dallas — that seems to be some kind of line you really don’t want to cross.)

Surely, not every mommy who develops a fondness for Shiraz when the children are young turns into a raging alcoholic. And yet, as with so many motherhood issues, it’s a subject that draws an all-or-nothing debate, with people advocating abstention lest you dive headfirst into another bottle to self-medicate. It leaves us cocktail-friendly moms wondering: whatever happened to moderation?

In the January issue of Today’s Parent in a story called Confessions of a Merlot-loving mom, writer Lisa van de Geyn argues for just that. Relax, mommies, she writes. It’s OK to indulge from time to time, or even to have one drink a day.

So with New Year’s Eve approaching — and the prospect of two more weeks of non-stop parenting while the children are out of school — let go of any guilt you may have about drinking on the  parenting job. As long as you don’t overdo it regularly, don’t stress about it. Moms already have enough things to angst over on a daily basis; it’s no use beating ourselves up over the occasional journey to Margaritaville. Hiccup!

This entry was posted in Parenting and tagged cocktails and drinks, drinking while parenting, parenting. Bookmark the permalink.