Can’t afford the iPad your six-year-old so desperately wants for Christmas? Let Santa break the news to her when she’s sitting on his lap at the mall. A New York Times story reports that because of the economic downturn, would-be Santas who attend one Michigan Santa school are being coached in ways to tell little Billy he needs to scale back his wish list.

In other words, parents can’t afford the costly gadgets deemed necessary by today’s tyrannical tykes, so they’re looking to the mall guy in the red Santa suit to be the “heavy.” One of the Santas quoted in the story, former Alabama state trooper Rick Parris, said, “When kids start asking for the world now, I just say, ‘Hey, look, Johnny, you ain’t getting all that.’ ”

This was my son’s reaction when Santa told him, “You ain’t getting that iPad, son.” 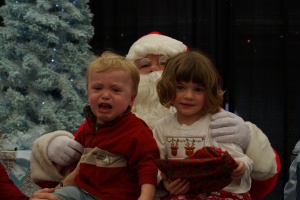 Actually, he was only two in this photo, and iPads didn’t exist yet. But my point is the “Santa Visit” is already fraught with disaster potential as it is — the expectation your little darlings will sit on some stranger’s lap and divuldge their deepest desires is, frankly, asking a lot … and also a little creepy — without burdening Santa with parenting duties. Think about it: this poor man regularly has his beard pulled and gets peed on, plus he has to feign interest while your kid goes on and on about Star Wars Legos. Now you want him to come up with some wild story about elves on strike, or toy production problems, when really, all he wants to say is, “You ain’t getting all that,” before bracing for the inevitable tantrum.

Poor Santa. Parents, do him a favour this year. If you can’t afford some of the expensive Christmas gifts your kids want, why don’t you be the one to bring their expectations down to earth from their crazy North Pole heights. It’s not that hard. Say something like, “Billy, you sure have taken a lot of time to cut out all these pictures from the Toys ‘R Us catalogue and paste them onto your Christmas list. But you know, there’s not a lot of room in Santa’s sleigh, what with the world population at 7-billion.”

If nesessary, you can end your explanation with something along the lines of, “You ain’t getting all that.” It’s OK to take a tantrum for Santa this year.

This entry was posted in Parenting and tagged Christmas list, expensive gifts for kids, parenting, Santa. Bookmark the permalink.