It’s official: we built a playground!

For the past two years I have dedicated my spare time to helping a group of local moms plan, fundraise for and — finally — build a new playground and naturalization area at the local elementary school. Five out of six of us have children attending the school and we found ourselves in a “You need to do this or the children won’t have a playground,” situation. Yes, we were all somewhat guilted into volunteering for what turned into A BEAST.

This was taken three weeks ago, when a crane was off-loading the new equipment.

We could have just taken the easy way out and ordered ugly Blue Imp equipment from the blinged-out dude who showed up at the school with a brochure one day back in 2011.  We could have just pointed to page 49 and said, “Yes, we’ll take the cheap-looking apparatus with the super lame short slides,” and then put everything in the same place as the old playground. But no. We had dreams of something grander; a vision that could only be realized slowly, over long periods of time at many meetings during which gin and tonics were liberally consumed — a never-before-been-assembled-colossal-play-structure-from-Germany kind of dream, along with a forest of trees and a ginormous donor pathway. 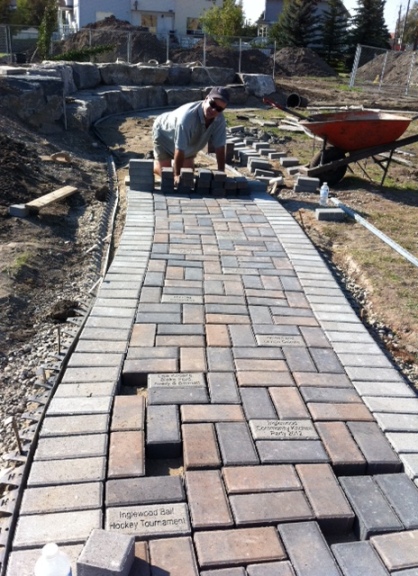 A volunteer toils away on the donor pathway, which turns out to be much harder to execute than originally thought.

Many thanks to the community and corporate donors who made the playground (and pathway!) possible. 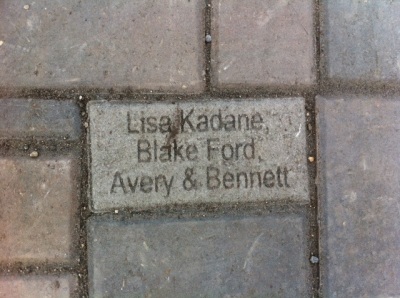 I also love that we have a donor brick! A very cool (and affordable) way for families to get involved and take ownership of the new park.

I was going to blog about our struggles trying to get ‘er done on time and on budget, with our sanity miraculously intact. But now, in hindsight, what’s the point? Does the world really need to know about the crazy porta-potty lady? Or the 11th-hour “crowsnest” fix? No.

Though it caused us many headaches (and much pillow-screaming), in the end it paid off to dream big. We have a spectacular new playground that is a huge improvement over the dumpy old equipment. What’s more, we have trees, a stone amphitheatre, picnic tables, benches and a beautiful donor pathway. Did I mention the warm-fuzzy feeling I got when I watched my kids play on the new equipment at the grand opening party this past weekend?

Bennett leads the troops across the rope bridge at the new playground. 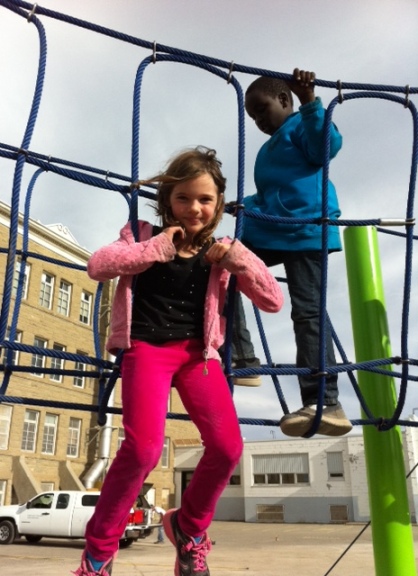 Avery takes a rest on the rope bridge.

It was also so nice and affirming to hear the words of thanks and congratulations spoken by many community members and school parents on opening day. Mayor Nenshi even came by to officially open the playground, talk about the importance of play and lead the kids in reciting a playground pledge. 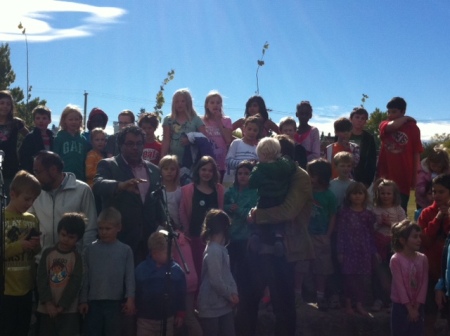 Mayor Nenshi has the children pledge they’ll have fun — and keep the playground free of litter and weeds!

I know I complained about the project when we were in the trenches, but it feels great to see a project like this come to fruition. As Nenshi said, we’re starting the second century of playgrounds in Calgary with this brand new play park at Colonel Walker School!

As a parent of a school-age child you often find yourself roped into school-related volunteering. It’s always for a good cause but it’s time-consuming and more work than you thought it would be when another mom, or the smiling principal, strong-armed you onto the team.

And so for the last several months myself and three other Grade 1 moms have been spearheading a new playground at our kids’ school. The current playground is more ashphalt than parkland. It has no trees for shade, nowhere to sit, is riddled with ankle hazards (gopher holes) and has a rather ghetto/penitentiary-like feel to it, what with the net-less basketball hoops and in-need-of-paint exterior of the school’s 1960s-era addition. Plus the equipment has reached its best-before date and is deemed unsafe by the Calgary Board of Education. 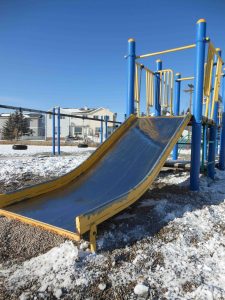 Before you wonder what I’m complaining about and how rum punch could sabotage the process, let me tell you that designing and building a new playground is not about flipping through a Little Tykes brochure and ordering equipment. No. It’s about engaging the community, parents, teachers and students in the process. It’s about working with a landscape architect to naturalize the space so it no longer looks like a prison yard. You want a play area the kids will love and the community can be proud of; not one that invites vandals with spray paint at 3 a.m.

Building a new playground also requires a lot of money. Like, hundreds of thousands of dollars. So, this year our school’s Kitchen Party fundraiser was dedicated to the new playground. We on the playground committee thought this would be a perfect time to have our captive audience fill out playground surveys, plot dots on a playground map and leave the party with brochures to bring to their employers to hit up for cash.

Revellers would’ve plotted dots on a playground map and filled out surveys had the Mardi Gras-themed party not served up nine gallons of rum punch.

I think all of that would have happened, if it hadn’t been for the rum punch. Several months ago Kitchen Party organizers asked me if I could make a signature cocktail for the event; something festive that nodded to New Orleans and Mardi Gras. I love rum punch so this was a no-brainer. I also make it really strong, like they do in Barbados, home of Mount Gay rum (Select Wines & Spirits donated a case of Mount Gay Eclipse to our cause). 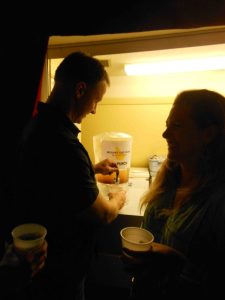 Revellers in line for rum punch.

What ended up happening was this: everyone drank a lot of rum punch. Then everyone lined up for tequila shooters. No one filled out surveys. No one plotted dots on a map or walked away with a colour brochure to ask their employer for a cash donation. Instead, sombreros were worn and we danced the night away.

But everyone in attendance sure spent a lot on booze, and that night, for the first time, I was having a blast on the playground committee. If it takes a village to raise a child, it requires an inebriated one to raise money for a new playground.