I have a confession. Prior to this past weekend, I had always harboured a somewhat snobbish and superior attitude toward Calaway Park. For those readers not from Calgary, Calaway Park is an amusement park on the city’s outskirts that operates in the summer. It has a roller coaster, log ride, bumper cars and carousel, plus all manner of midway snacks, and games to play to try and win those giant stuffed animals popular among children and the white-trash set. You know the ones I’m talking about. 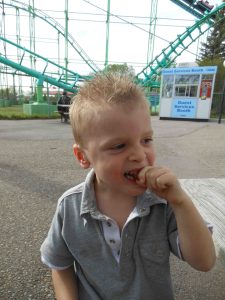 Snack break by The Vortex. Blake says I should’ve dressed him in a ‘beater to complete the look.

At any rate, Disneyland it ain’t. But here’s where it helps to see a place through the eyes of your child, as if for the first time. Our kids have never been to Disney or Magic Mountain or even Elitch Gardens. They have only been to the Calgary Stampede midway, and compared to those rides (and the accompanying lines), Calaway Park is “super awesome.” I am now in agreement with this sentiment. 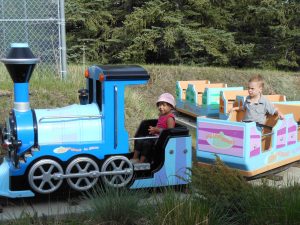 Bennett knows he’s on the lamest ride at Calaway Park — it’s not even listed among rides on the website!

We scored tickets through Renfrew Educational Services where my son attends preschool, as part of the Light Up a Child’s Life event sponsored by the Calgary Cerebral Palsy Association and Calaway Park. Though the theme park could use a fresh coat of paint in spots and the rookie teenage workers give the place an Adventureland feel (but not in a bad way), we had a super awesome evening of great weather, no lines, lots of junk food and crazy rides. Here is my Top 5.

1. Shoot the Chutes. Calaway Park’s version of Splash Mountain has all the steep descents without all those annoying singing animals. In fact, at one point when our log floated dangerously close to the log in front of us just prior to the 33-foot drop, I thought we were going to die in a log-jam pile-up. I only wish I’d shelled out the $9 post-ride for a picture of us screaming during the descent.

2. Cotton candy. Sometime between 1979 and now, scientists have experimented on this childhood confection, turning a once humble-if-sugary treat into a diabetic catastrophe of colossal proportions. Could they make the $5 bag any bigger? Sweeter? Pinker? I think not. 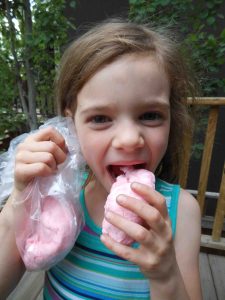 3. Rides for all ages. While Avery and Blake were off on The Vortex, I took Bennett on the Swirly Twirl. It is way cooler that it looks. 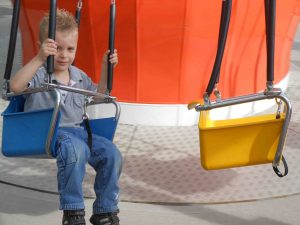 Just chillin’ on the Swirly Twirl.

4. Haunted House. This is quite possibly the lamest haunted house I have ever set foot in. And yet, the children loved it, likely because it’s dark but not at all scary. A giant papier mache spider? That’s all you’ve got? The best part: no nightmares post-house.

5. Bumper Boats. We almost skipped this gem of a ride because it was late in the evening and I was worried we’d get wet and cold. Well, we got wet, but our maniacal laughter as Bennett and I chased down other boats to spray them with the squirter, kept us warm.

Thanks for the fun CalawayPark. We’ll be back!