“If most of the big dinosaurs like T-Rex lived during the Cretaceous Period, why didn’t they call it Cretaceous Park?” I asked, pondering all-things-dino inside the visitor centre at Dinosaur Provincial Park.

“Because Jurassic Park sounds better,” deadpanned Blake. Avery agreed, and soon found more evidence that Hollywood embellishes its movies: the giant, terrifying Mosasaurus sea dino from Jurassic World was, in real life, only about 40 feet long (still huge), but nowhere near the 100+ feet depicted in the blockbuster.

It had been four years since our family had done anything remotely dinosaur-y in Alberta, so when an opportunity arose to try comfort camping in Dinosaur Provincial Park, we didn’t hesitate. 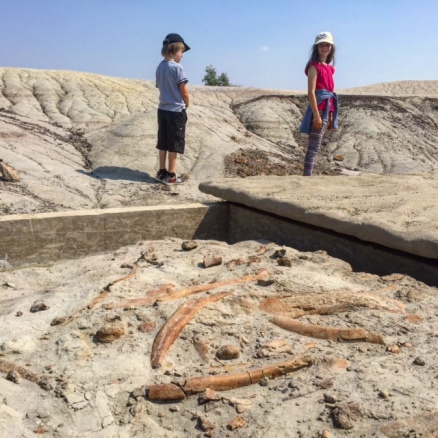 The park, located just a half hour north-east of Brooks, is stunning. Its five interpretive trails meander through the surreal hoodoo- and coulee-ridden landscape, and also through a grove of ancient cottonwood trees. Plus, as part of a story for the Calgary Herald, running this weekend, we got to experience the Centrosaurus Quarry Hike with a guide who not only informed us of the truth about Mosasaurs, but helped us learn to spot fossils in the extensive bone bed.

Guide Jarrid Jenkins educates us about Centrosaurs and their fossilized remains.

The kids loved the park and we decided to return to dinosaur country a few weeks later, on Father’s Day, to visit the Royal Tyrrell Museum in Drumheller and search for fossils there. The museum is fantastic, weaving a tale of the province’s geological history — that included tons of dinos during the Cretaceous Period — with awesome dinosaur skeleton displays created from original fossils and some casts.

The kids don’t quite measure up to this T-Rex leg inside the Royal Tyrrell Museum.

Afterward, we put our new fossil-hunting skills to the test on the short interpretive trail adjacent to the museum, and were soon rewarded with a huge discovery. Blake likes to travel off-path, along gullies that churn with water after rainstorms, where the most erosion occurs that can reveal new fossils. Sure enough, I stumbled upon something sizeable: I like to think it’s part of a head or pelvis.

Avery’s hand next to the dinosaur fossil, for scale.

And, like the budding palaeontologists we’re becoming, we reported our “find” to the front desk after the walk. We also left it there for other families to discover. Thanks for the awesome dino double-header, badlands — we’ll be back soon!

Avery and Blake hiking in the badlands near the Royal Tyrrell Museum.