Avery has been asking to do a lemonade stand for the past several summers. In previous years the timing was never right — the weather was cool and rainy, or the bike path in front of our house had been washed away by the flood — but this past weekend the ideal lemonade conditions came together: warm, sunny and lots of bicycle and pedestrian traffic due to a brand new paved path on our street.

Selling lemonade, iced tea and cookies at a stand along the Bow River in Inglewood.

Blake hit the grocery store for supplies (lemonade and iced tea mix, and soft oatmeal raisin cookies) and Avery got to work creating signs for her stand. Blake Googled, “What’s the going rate for lemonade at a lemonade stand?” and came up with pricing. The two of them figured out the up-front costs of the stand and put together a cash float so that Avery could give cyclists change should they hand her a $20 bill for a .75-cent cup of lemonade. Finally, Avery recruited a friend to help her, and they negotiated an hourly rate ($2) for her buddy. Final lemonade stand touches included hand sanitizer, napkins, a trash can, and mint leaves and ice cubes floating in the giant beverage dispenser. 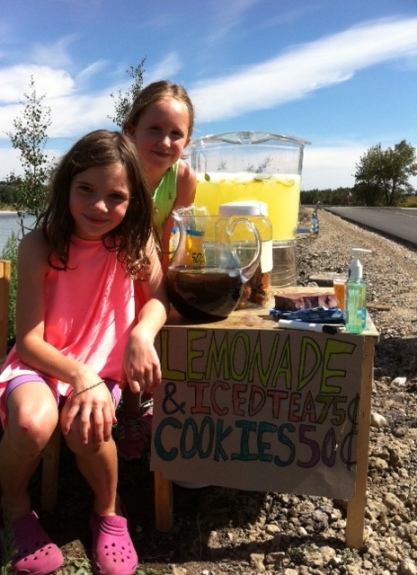 Avery and her friend sell .75-cent cups of lemonade and .50-cent cookies, on their way to a tidy profit.

Then, they waited for business while Blake and I watched through the living room window. And what business! The stand was busy from the beginning, with cyclists lining up and neighbours streaming out of their homes for a refreshing drink. The cookies (priced at 50 cents) were a top seller, with one neighbour boy buying three. Many customers commented on how good the lemonade was (thanks Country Time!), and some asked her what she was raising money for.

Avery: “Well, first I have to pay my dad back for the supplies and the float, and then I’m going to save the rest.”

Cyclists line up for a cup of lemonade along the Bow River pathway in Inglewood.

Not only was the lemonade stand a fun way for Avery and her friend to spend a sunny summer afternoon, they got to practice math by calculating change. They also got to talk to strangers — something that rarely happens in today’s over-protective world — an important life-skill that’s also a confidence booster for kids.

And the best part, of course, was the profit. After she repaid Blake and paid her hired help $4 for two hours, Avery counted out $39 that she can hardly wait to deposit into her bank account — not bad for a nine-year-old’s afternoon job!