I am the first to roll my eyes at so-called “disaster tourism,” where people visit a place that’s been devastated by a natural disaster, such as New Orleans after Hurricane Katrina, to see and take pictures of the aftermath. Call me an old-fashioned travel rube, but I can’t really get my head around the appeal of going somewhere to ogle carnage. Part of this stance has been influenced by where I live — all summer disaster tourists have been walking or riding their bikes up my sidewalk to gawk at the eroded river bank and our churned up street that almost fell into the Bow River.

But I changed my tune when I found out the Inglewood Bird Sanctuary was offering free guided Flood Tours four times a week into October. Before the flood we visited the Bird Sanctuary as a family a couple times each season. We often spotted deer or chickadees, and sometimes a muskrat or great blue heron. I’ve missed the familiar hiking trails and wanted to see for myself how this Inglewood attraction fared during the flood — not to gawk, but to know.

The trails at the Inglewood Bird Sanctuary remain closed, but you can visit the park on a “Flood Tour.”

Guide Kyle McManas, a member of the education team for the federally-designated wild migratory bird sanctuary, led us from the nature centre (which was unaffected by the flood) on a paved path toward the lagoon. There we stopped and looked at the debris-clogged main bridge while McManas described the impact of the flood on the sanctuary’s infrastructure and animals. 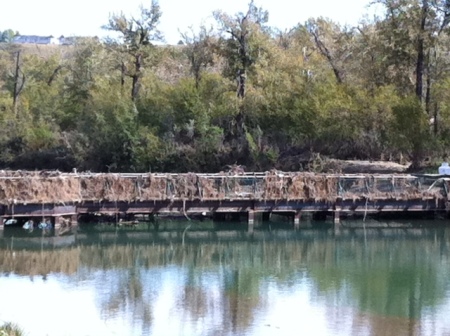 The large logs have been removed, but this bridge is still clogged with detritus.

At its highest, the river flowed through the sanctuary over top of the bridges (washing one away completely) and all the paths — save the high gravel trail running between the lagoon entry point and Colonel Walker House — at an estimated flow rate of 2,200 cubic metres per second, three times the flow of the 2005 flood that also flooded the lagoon. When the water receded it left a mess — plant debris and layers of silt. Park staff were encouraged to see wildlife return to the area immediately, including deer, beavers, ducks, kingfishers and even porcupines. As McManas explained, though dramatic, floods are a regular (if sporadic) occurrence in a riparian environment.

Avery examines a layer of silt that runs along the edge of the trail, proof the water ran that high.

While it’s what nature does from time to time, it’s still not nice to see how much the Inglewood Bird Sanctuary has to do to rebuild. Though work has already begun on the trails, the planned re-opening isn’t until summer 2014.

This coming weekend, Sept. 28 and 29, you can visit the Inglewood Bird Sanctuary and Colonel Walker House, which will be open between 10 a.m. and 4 p.m. both days as part of Doors Open YYC. Interestingly, Colonel Walker House was originally built much closer to the Bow River, but a flood in 1882, and then another one in 1897, destroyed the first two attempts. The current brick house sits much higher, but its basement still flooded in June.

So, have I become a disaster tourist? Hardly. It was actually a relief to see the bird sanctuary — I was expecting a lot more devastation (I’m sure it looks a lot better now than it did on June 25, the day the workers were allowed back in). Still, they have a lot of work ahead of them and I’m hopeful we’ll be able to resume our regular walks there soon.

A diagram inside the nature centre at the Inglewood Bird Sanctuary illustrates how high the Bow River ran before it crested at midnight on June 21 — 4.1 metres, up from about 2 metres at 9 a.m. on June 20.