I’m off to Fernie Alpine Resort for some spring skiing this weekend. I’m looking forward to a huge base of snow, a couple of (hopefully) bluebird days and at least one run off of Polar Peak. Then I’ll head over to the Griz Bar for some apres-ski drinks including a Griz Bar Caesar. 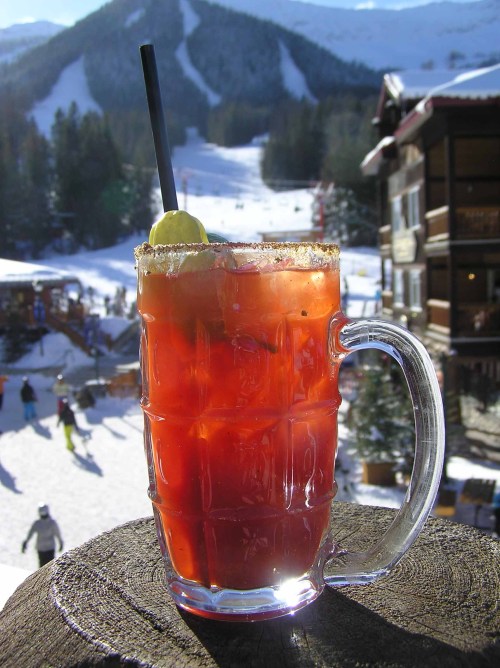 What’s better than apres ski? A Griz Bar Caesar on an outdoor patio on a sunny afternoon apres ski.

Two years ago I searched the town for the best apres-ski cocktail. What I discovered is that most skiers drink jugs of Kokanee after a day on the slopes, but the lucky few who find themselves seated at a vinyl booth inside the Griz Bar can quench their thirst — and a desire for a cocktail with some kick — by ordering the Caesar. It’s also the best choice during Griz Days, Fernie’s annual festival that’s on this weekend in honour of the mountain man (Griz) responsible for firing a cannon into the clouds and causing the town’s epic snowfalls. Cheers to Griz, Griz Days and the Griz Bar Caesar!

Rim a high ball glass with celery salt. Fill with ice then add vodka, Worcestershire and Tabasco. Top with Clamato, stir and garnish with a pepperoncini pepper.