How an overflowing toilet = gratitude

Last week Blake and I attended the annual Chromosome 18 Registry & Research Society conference in San Antonio, Texas. In between strolls along the lovely River Walk, a visit to special needs amusement park Morgan’s Wonderland and a quick stop at The Alamo, we got caught up on the latest Chromosome 18 research and met children and adults with the same condition as Bennett (18q-).

Who needs an iPhone while waiting for guacamole when there are fish and ducks to watch?

I left the conference feeling both hopeful and thankful. Hopeful, because we met a young man with 18q- who just graduated from high school and will be attending college in the fall. We also shared a taxi back to the airport with a woman with 18q- who lives independently and travelled to the conference by herself. And thankful, because Bennett is doing so well in spite of his challenges. He walks and runs, feeds himself (however messily) and is talking better every day.

But it’s still hard, as I discovered yesterday. His behaviour hasn’t received the memo that, since he’s potty trained and all, he’s a big boy now.

I came home from working on my laptop (I’d hired a babysitter for the day) to discover that Bennett had flooded the upstairs bathroom. I’m not sure if he’d been trying to flush another pair of Nemo briefs or what, but when the water in the commode didn’t go down he’d evidently continued trying to flush until the toilet overflowed and the entire floor was covered in water, according to a bystander’s testimony (that would be his sister). At any rate, water was pouring down through the ceiling into the pendant light above our kitchen island just like a faucet, the upstairs hallway carpet was soaked, the babysitter was abashedly apologetic, and there was Bennett, asking me, “Are you angry Mommy?” Good question.

Was I angry when he accidentally called 911 during this year’s Stampede Centennial and a police van showed up at our house (for the record, I was in the backyard drinking margaritas with a friend. Can you blame me?)? 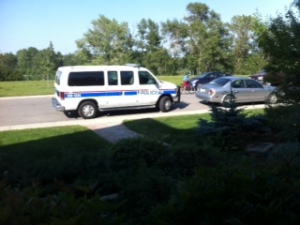 This is what shows up in front of the house when your four-year-old calls 911.

Was I angry when he somehow programmed our house alarm to go off when I answered the phone?

Was I angry when he caused our friends’ garage door to overheat and stop working from repetitively pushing the button to make it go up and down?

The answer: yes, and no. I get frustrated that no matter how many times I tell him not to do something (“Quit flushing the toilet!” “The telephone is not a toy!” “Don’t play with the alarm keypad!” “Stop pushing the garage door button!”) he lacks the impulse control to change his behaviour. On the other hand, I am glad he is physically capable of doing all those tasks, even if he overdoes them. I am thrilled he recognizes my emotion as anger and wishes me to be happy instead (“Mommy, be happy?” he asked me earlier this afternoon). I am hopeful that one day he will learn that those are inappropriate ways to “play” and that instead of laughing delightedly at the swampy bathroom floor, he’ll stop mid-flush, run downstairs, and tell the babysitter that the toilet is overflowing.

In the meantime, I will practice deep breathing and call some drywallers. In the grand scheme of life it’s a very small thing: wet towels, wet drywall, perhaps a bit of mould. No biggie. He didn’t burn down the house. No one got hurt. As I learned last week in San Antonio, it could always be worse … gratitude. 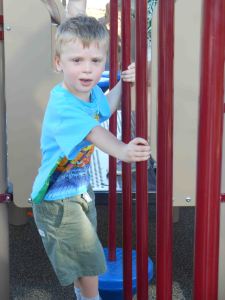 Bennett achieves a new milestone — negotiating his way from platform to platform — at Morgan’s Wonderland.

This entry was posted in Parenting and tagged cha, kid overflows the toilet, parenting a child with special needs, special needs parenting challenges. Bookmark the permalink.

3 responses to “How an overflowing toilet = gratitude”